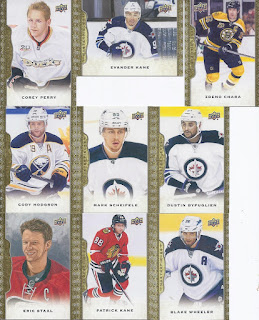 And darned if I won't show off all 90 cards. And if you were a fan of the Winnipeg Jets, you might think you were in heaven with this release 9 cards into it. Unfortunately, those 4 were the only cards they got. Corey Perry looks like he should be in a boy band on his. 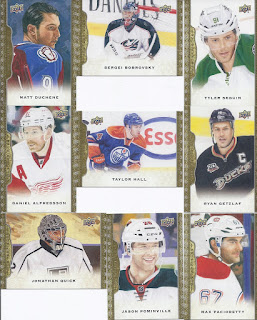 Some of these in the second batch are really like - especially the Quick and Duchene. I'm guessing Alfredsson was still active and considered a Red Wing at the start of the season, so that's why he's a Red Wings. 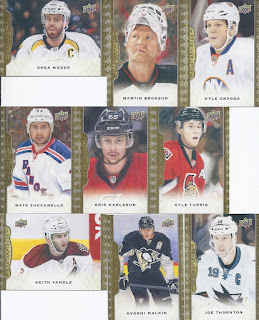 Something spooked Kyle Turris! The Brodeur card is really nice, considering it was probably painted pre-Blues and pre-retirement. 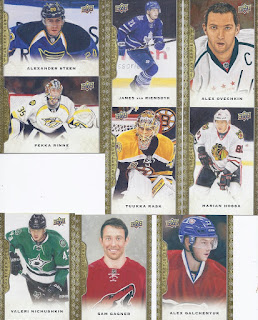 You can really see the strength of the in-game paintings up against the posed photos in this batch. 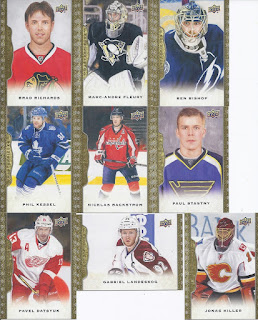 Paul Statsny's card looks like a police sketch they'd release to the media as a person of interest in the rash of lawn jockey thefts plaguing suburban St. Louis. Hiller might be the only person with a new team in the set that warranted an in-game painting. Although I am sure I missed someone either on the base or SP portion. 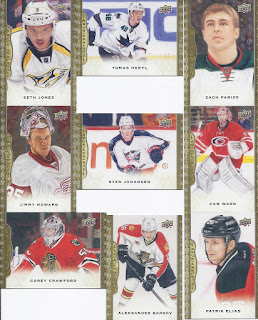 Seth Jones' card is proof the puck doesn't need to be in play for the painting to be nice and intense. Parise joins Corey Perry as the victim of the boy band syndrome. 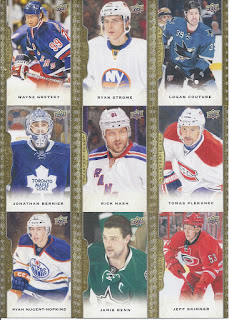 You knew that since this was Upper Deck, the Gretzky card(s) would look good. 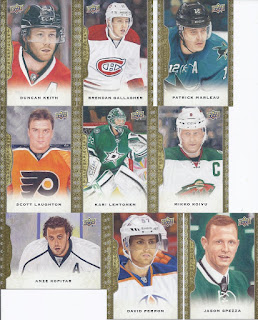 Patrick Marleau looks asleep in his. And Anze Kopitar looks like he's whacked out on cough medicine. 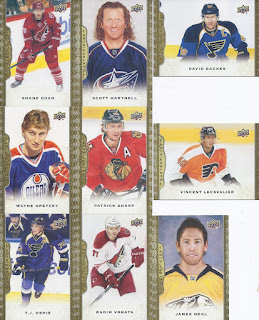 Here's the second and last Gretzky of the base sets. There were also SPs of him on the Kings and on the Blues. 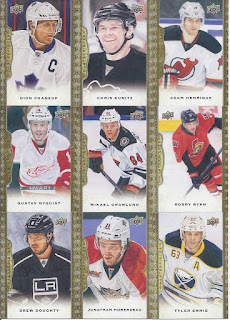 And the last group of 9.

Considering I paid for these what I'd pay for shipping along for this base set from other sources, I'm happy with this. I also grabbed one of the flea market repacks, which I'll get to at some point during the week.

And the Plus one. 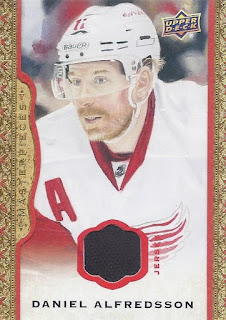 via ebay, my first Alfredsson on the Red Wings hit. And it might be the only one that I'll ever add. I can't recall the Wings wearing black last season, I'm guessing this is still a Senators sweater. This red frame is /85,
Posted by buckstorecards at 11:39