I was hoping a trip through Walmart would reveal some more hanger boxes of GQ. Alas, they were out of those. But I did notice a repack product unfamiliar to me.

Of course, that means I had to try it. 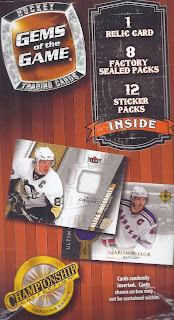 For me, that read as a relic card of someone not close to the level of the guys pictured on the box, a bunch of Victory and MVP packs, and some stickers.

And for the most part, it was what I thought.

The relic wasn't spectacular, but it did hit one of my PCs, so that's a big plus.

There were sticker packs. 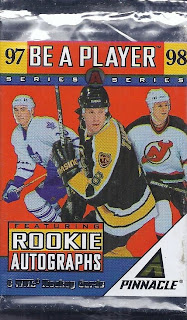 Nope. That was not what I expected in this repack.

I'm not sure if there were supposed to be one of these packs with a guaranteed auto in there. Considering I probably would have mentioned something on the packaging if there was an autograph in the repack, I'm guessing these aren't in every one of them.

Yet, I'll probably try at least one more to find out. 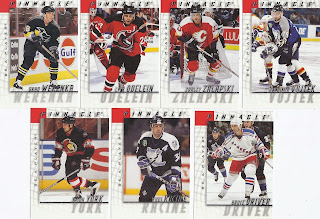 Here were the 7 base cards in there. A Senators card is always nice. Along with the ability to compare and contrast a Tampa Bay third jersey alongside the regular one.

I've busted three of these packs, and my autos were a die-cut parallel of Zarley Zalapski, and a base auto of the late Pavol Demitra. Pretty good additions. So, what is my third pack-pulled auto from this product? 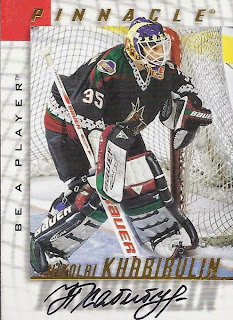 Another pretty decent name. While not super valuable, it is someone that most hockey fans have heard of. And, as a bonus, it appears that his signature uses Cyrillic, so there's another plus.

So, even without Target being able too woo me with repacks, Walmart might fill the gap, albeit with no other products except hockey.
Posted by buckstorecards at 12:00