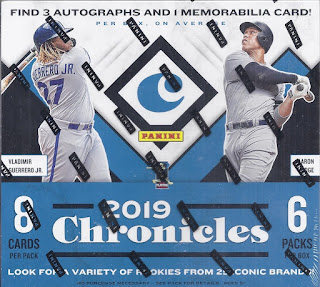 As the box-busting year draws to its conclusion, it is a perfect time for yet another box of my favourite product of the year, whether it is basketball or baseball. 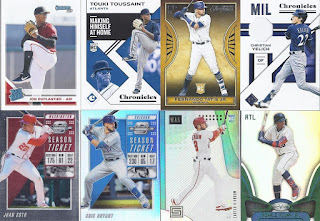 We get the relic out of the way on the first pack. Kris Bryant brings the shininess into this, and with the Acuña I landed last time, it is nice way to start the box by reminding me of one of my better pulls of the year (although the best has to go to 1 of my 2 Gordie Howe-graphs). 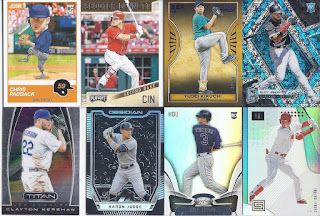 I like those 'big head' Score cards more than any sane human being should. Enough that I wonder what they'd look like if Topps issued a licensed version of these. The Eloy is a /99 Blue Neon parallel. 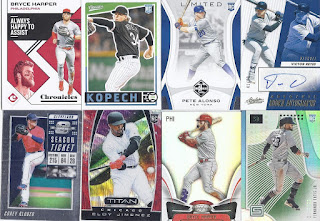 Here's another Eloy numbered card, with the Titan being a Ruby Wave parallel. There's the first of the autos in the box, Victor Reyes was a Rule 5 rookie in 2018, but all his rookie cards were in 2019 sets, so this is still a rookie autograph despite it being his second season. 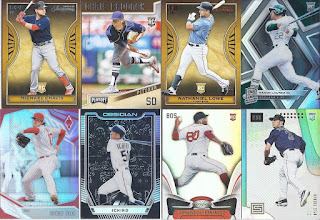 The blandest of the packs. Moving on... 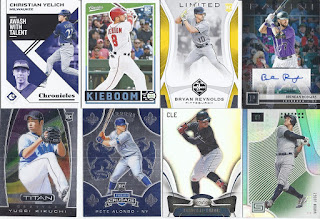 But that's better. An autograph, and a the second appearance of Polar Bear Pete! 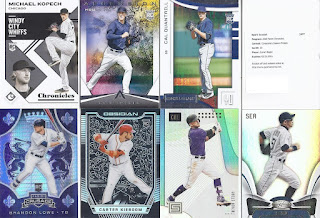 It looks like I'm ending on a redemption. But since I haven't managed to get myself a Cavan Biggio autograph yet for my Jays collection, I'm more than willing to wait to add one to my collection. Also, this was a hot box for numbered parallels of guys named Lowe who play for Tampa. This Hyper parallel comes in at /299.

And there you have it! One last baseball box to break for 2019, and that's up tomorrow for Christmas Eve.
Posted by buckstorecards at 03:08