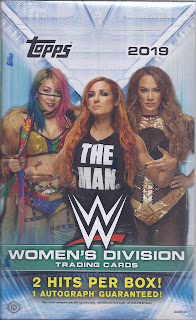 As the year draws to a close, let's bust some wrestling cards! 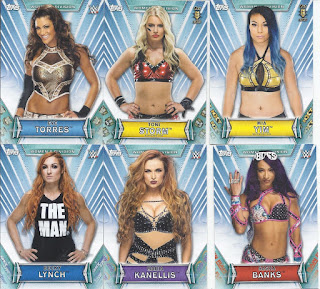 I am so glad they ditched all the pink that was all over the base last year. That was way too stereotypical. The first part of the 100 card base set is the roster, and they just feature generic poses. The bottom of the card includes the show the wrestler was most likely to be associated with at the time, which gives mention to more obscure shows like 205Live and NXT:UK. Legends like Eve Torres get the classic logo. 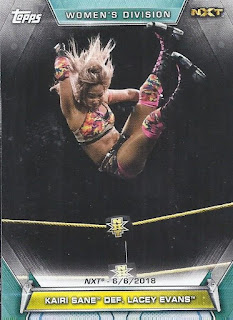 The final 40 cards of the base set does allow for some action photos, such as Kairi Sane's InSane elbow. 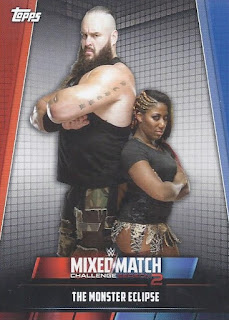 And now, probably the only problem with the set. There is one of these Mixed Match Challenge 2 cards per pack. There are 24 packs in a box. The set is 25 cards. Thank you, COMC. 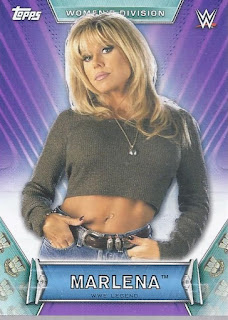 There was only one numbered base parallel in the box, and it was this purple /99. 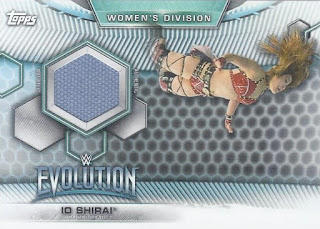 Hey! You can combine an interesting photo with a basic relic! 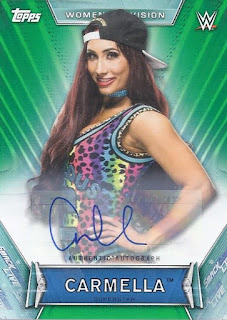 And my auto. It looks like the Staten Island Princess only signed select letters in her name, making it look like I got the autograph of someone named 'Call'. Maybe Lacey Evans can take time out of her busy schedule to teach cursive to Carmella.

And there you have it!
Posted by buckstorecards at 02:22