I don't just buy the Bills in group breaks. Sometimes, I'll pick up other teams just for the heck of it. 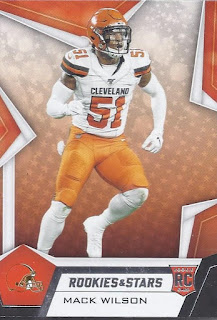 It could be the idea of chasing a random nice hit for the collection, but that isn't true with the Browns this season, as I can chase rookie cards of 2/14 baby Mack Wilson. He was a 6th round pick out of Alabama, and he has seen more action than you'd expect from a lower round pick in his rookie season. 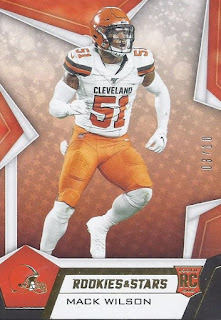 That also means parallels, such as this gold /10. 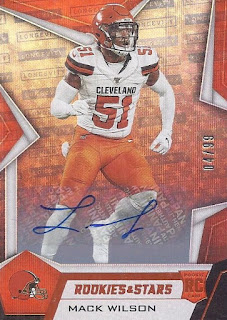 And let's throw in an autograph for good measure. I won't attempt to parse it though. These 3 move my total cards of Wilson to 9. 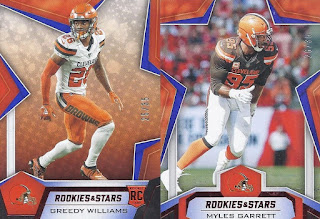 Of course, there are base cards and parallels for players with less interesting birthdays than 2/14.

There was reasoning behind my purchase of the Browns spot in Rookies & Stars. I can't say the same thing for the Colts in XR. Maybe just chasing random nice-looking hits? 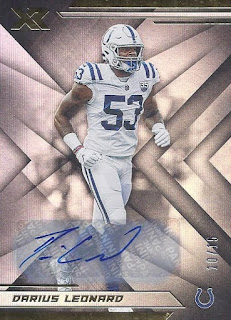 Here's a second year autograph of someone who really didn't have too many in his rookie season. Pretty basic, though. 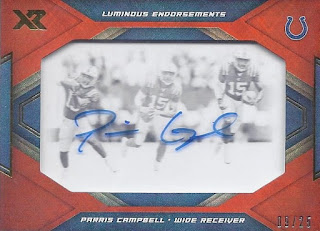 This, on the other hand, qualifies as a nice looking hit. The autograph is on a piece of acetate over the triple image of the player, creating a nice, albeit a slight, shadowbox quality for the look.

So I guess I guess my plan succeeded with both teams.
Posted by buckstorecards at 05:16