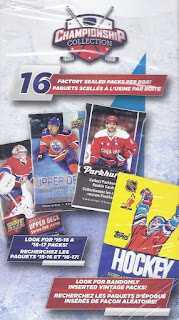 Somewhat of a new design here, but a familiar repack with 16 packs.

The presence of a lot of 12-13 Score packs is familiar, but nothing really unexpected among the list of packs contained within. 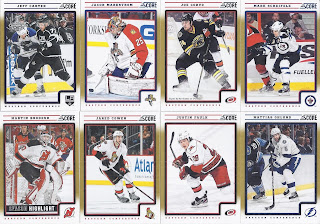 That does mean 8 gold parallels. Amazingly, all 8 of these were needs in my "I've busted way too many packs of this" set "DON'T SEND ME GOLD PARALLELS" build. 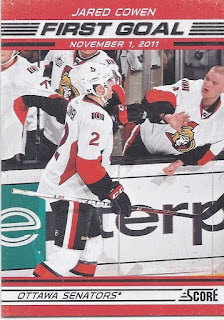 Only one insert among the 8 packs - but at least it was a Sens card. 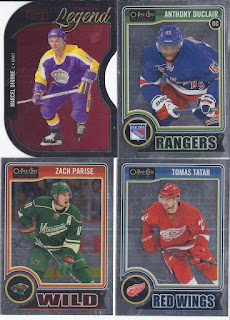 With 4 cards per pack, I might as well scan everything in the Platinum pack. A nice die-cut card with the Dionne, and a rookie card of a current Senator make this a pretty good pack. As I type this on Saturday, Duclair is coming off a hat trick against Columbus. 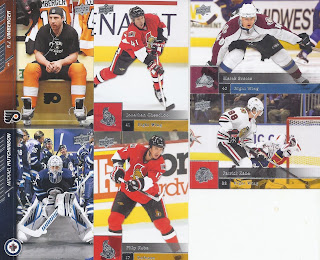 7 packs of flagship means I'll be getting some interesting photos, and some Sens content as well.

3 seasons worth of UD means the chance at 3 different YG designs, and I went 3 for 3.

Each 09-10 pack contained a Victory Update card. Grabner's probably one of the better rookies in the update set. And there's yet another card for a future mailer bound for Ann Arbor. 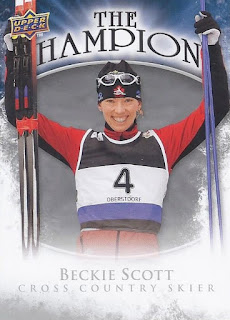 09-10 was the season the UD added The Champions insert set to their various sets. I can break out the 'Ladies' tag for this, as I got a card of a gold-medal winning cross-country skier. 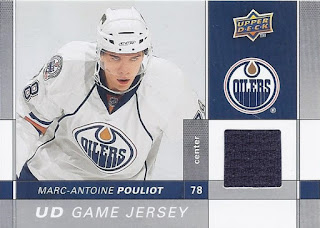 Surprisingly, the packs weren't all bent and searched before they were placed into the repack. Mind you, I'm not retiring and moving to the Caribbean on a Marc-Antoine Pouliot relic, but it was still unexpected to find this in the packs.

And there you have it!
Posted by buckstorecards at 04:51