While the result of the Grey Cup wasn't at all what I was hoping for, it was still nice to see a game when I've got a dog in the fight. In repack news, there was a Dollarama not far from my hotel, so I stopped into see if they had cards for the busting. 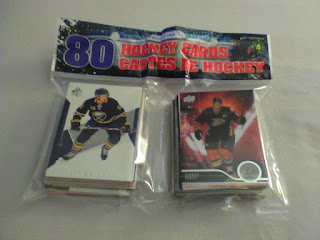 They sure did! While these are the same type of repacks I'd get at home, I can at least find out if the card are any better in Calgary Dollaramas. 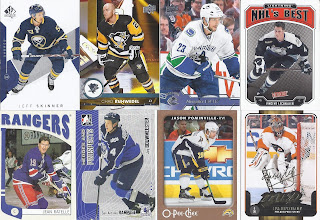 I opted for this one, since there was a visible card for my Kitchener Rangers alumni collection with that Jeff Skinner. As we go on, that Ratelle is a pretty nice looking card. I love that the arena seems so small with the banner hanging so low behind him. That MVP of Bryzgalov was an insert at the time, so that's somewhat unexpected. 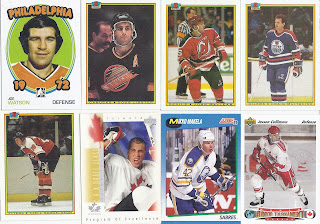 ITG made some really interesting sets from the period when they didn't care about things like licensing. 1972: The Year in Hockey is one of my favourite sets to come across cards of in repacks. There's a pair of patriotic Team Canada cards in the bottom row. The more interesting one to me is Serge Payer, a Kitchener Rangers alum. Although he did reach the NHL for 124 games, his only pro card was a 2000 Private Stock Titanium release from Pacific. He did get an auto with the AHL Binghamton Senators, a card I added to my COMC inventory over Cyber Monday. 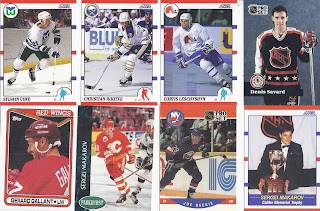 I guess it is appropriate that I land at least a couple Flames cards while in Calgary. 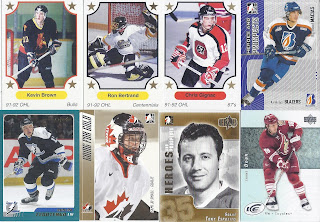 The junk wax era stuff seems to get grouped together in this, with this being the thrid run of three or more cards in a row from one of those set. Kevin Brown did reach the NHL, and joined Ken Hodge Sr as the second of two NHLers to be born in Birmingham, England. And for a minor league card, that's a pretty nice photo on the Bertrand. Throw in a nice mask binder card that also gives me a chance to use the 'ladies' tag on a post, and this is a solid group. 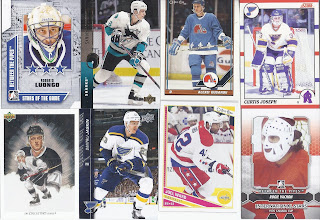 Definitely a mixed bag for the final 8, with a mix of junk wax with recent issues. A mask binder card from Luongo, a bilingual card, a drawn card and a legend to end it makes this still interesting.

And there you have it! The other 40 will be up in the next post!
Posted by buckstorecards at 05:30