After my brief trip to Calgary for some repacks while travelling, what better way to settle back into the home front than with some cards of players who have, or are, spending some time right here in Kitchener? 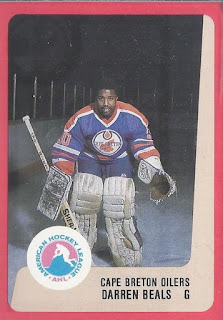 I'm going totally obscure for the first card. Darren Beals spent a couple of years in the mid/late 80s as the goaltender for the Rangers. From there, it was only a handful of games in the minors. It was still enough for this, his only card beyond junior. Still, it is worth adding to my collection. 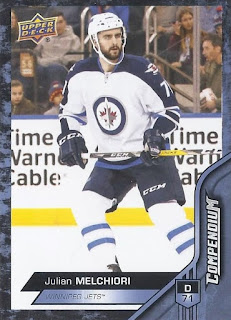 Melchiori has only had a handful of NHL cards, even from his rookie season. Thankfully, Compendium's e-packs provide an easy, and if one waits, an inexpensive way, to add cards of players further down the roster into the collection. Julian is in the Devils system this season. 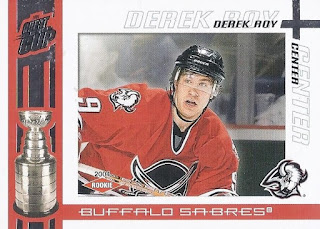 Derek is probably the most well-known of the players in today's post, as we're off to his rookie year and this /950 card. And you get an alternate jersey as well. At least it isn't the slug logo, or the yellow monstrosities. 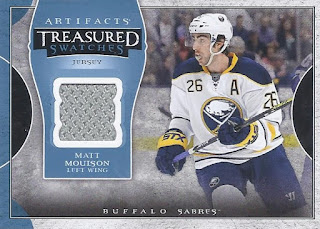 Speaking of those, I just needed a swatch from those ghastly jerseys in my miscellaneous collection. So, I just scanned COMC for the cheapest grey swatch available. And this was the cheapest.

This is sorta cheating, but these will count if/until these guys get NHL cards. Valade is draft eligible this season. Vukojevic was a third rounder of the Devils, and Vallati, who was traded to Oshawa a couple seasons back, was a Jets draft pick.

And there you have it!
Posted by buckstorecards at 08:15