What did the other half hold? 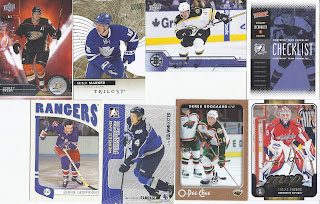 Not too bad of a start, especially with the Geoffrion card. Unfortunately, this is one of the cards that lists his birthday as 2/16. I'm always hesitant to add those to the collection, but enough sources (wiki, hockeydb, the Habs themselves) still list it as 2/14, so I'll stubbornly still add them. There's a dupe from the first side with the Bouwmeester San Antonio Rampage card.

That becomes a theme. 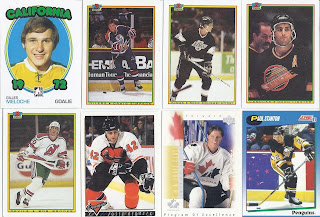 If I didn't mention how much I like getting cards from 72: The Year in Hockey, I'll hint at it again. That's a bonus with it being in Golden Seals colours. I'm duping up again here with the Lidster, but that's expected with 90 Bowman and repacks. 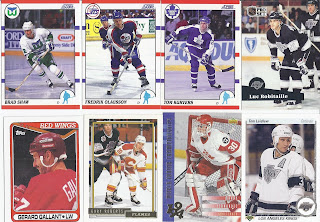 Your junk wax portion, but at least one is a gold parallel. There's a dupe here as well with that Topps Gallant. 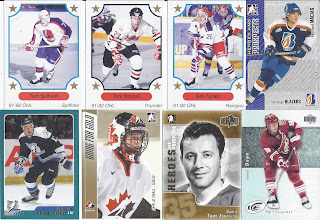 Your CHL portion of the break, but one is of a Ranger with Gib Tucker. And the next 5? Perfect dupes, and in the exact same location nonetheless, as in the first half of the repack. I like the Small and the Esposito, but not in the same repack. But at least they aren't dupe Bowman. 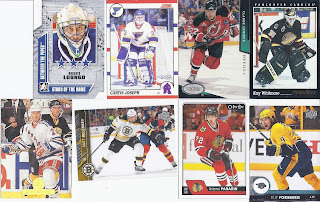 Two more dupes start off this with the Luongo and Cujo. That Rangers card is Messier. Joby Messier.

There you have it! If one disregarded the dupes, there were some nice keepers in there. At least enough keepers to make picking up a second of these while on the road worthwhile. I'll start recapping that next post.