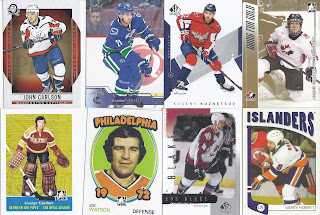 And we're off! I grabbed this because of the visible card from O-Pee-Chee's Canadian Tire release, which was a set I'd never picked up a card of until this repack. I'm duping up already with the George Gardner, but that's a fine card to get two of. I'm assuming that Brandon Sutter is a dupe. We end with one of the better nicknames in hockey - Garry "Toy Tiger" Howatt. 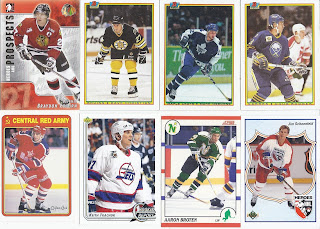 It's a 1990 Bowman Doug Bodger hot repack! As we get into this side's French portion, suddenly I've got a craving for donuts. 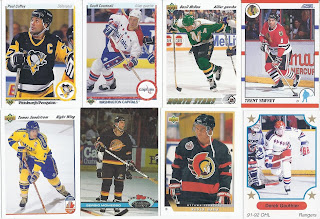 Pretty good portion for the PC, with this group book-ended by an obvious and a not so obvious card for the Kitchener Rangers collection. And a Sens card too! 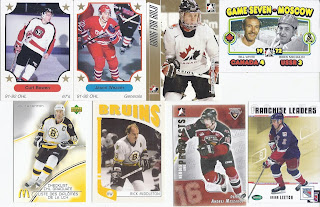 There's some nice cards here with a historical feel, but since Meszaros was a Senators draft pick, and was listed as such here despite being pictured as a member of the Vancouver Giants. 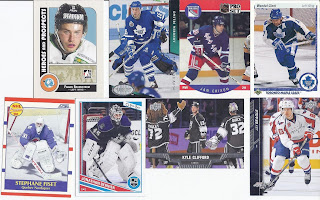 Another dupe with Brunnstrom, but it is nicely offset with a Bernier for the mask binder, and a card with a mascot cameo.

So, that's what repacks look like within the mountain time zone. The next cards will be tied into locations closer to home.
Posted by buckstorecards at 04:30