A perfect post for a Sunday - some Bills cards, as they go for win #10 in Pittsburgh this evening. All of these came from group breaks. 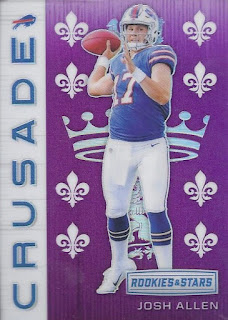 This one has actually been in my 'to be posted' pile for about a year, as this is from last year's Rookies and Stars. I just never got around to posting it. Josh Allen starting to inch his way to the hype level of his draft, but is still in the Tyrod Taylor area of "he won't lead you to a win when you're down by 13, but he won't throw a pick-6 if you're up by 3". 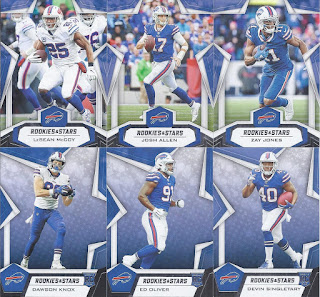 Last year's Rookies and Stars segues into this years. Of the stars, only 2 of the 3 are still with the team. At least the 3 rookies are still there. 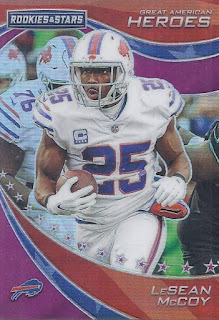 LeSean McCoy continues to show up in the inserts as well. 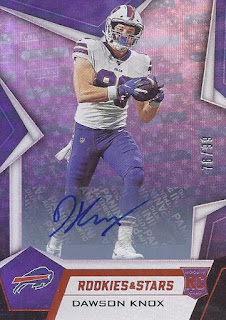 But the rookies return as I land another auto of their third round tight end pick with Dawson Knox.

Switching this to a little more high end of a product, here's some base cards out of XR. It is really nice to see 2nd year defensive star Tremaine Edmunds get some love here. 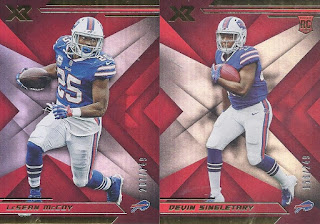 Some parallels. At least it kinda team colours. 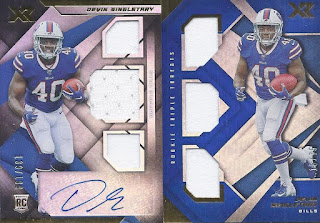 And some more of their other notable rookie on offense, Devin Singletary. He showed enough promise for the Bills to move on from McCoy, and he really hasn't disappointed in his role, especially with Frank Gore showing him the ropes. The white relics look so much nicer contrasting with the blue on the relic-only card as opposed to the auto/relic.

And there you have it! More group break football tomorrow, with more cards from XR & R&S.
Posted by buckstorecards at 05:59