Because sometimes you just have to pass on the repacks at Wally World and get a fresh new product on the shelves. They obviously passed on thick material for the packaging, as the first card is very visible. 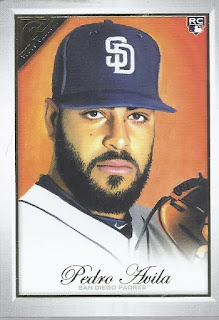 So, we move Willie Mays out of the way to see Pedro Avila. 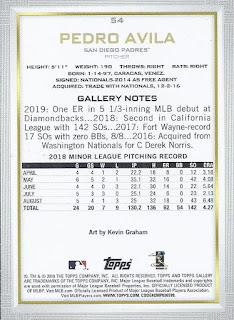 The back of the cards are pretty much exactly what you'd expect based on previous years of the product. 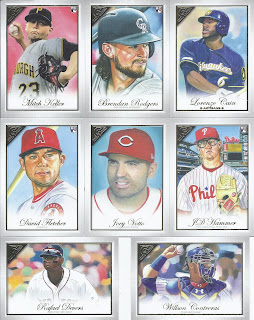 Here's the remainder of the base cards. I think this year's release features the debut of horizontal base cards. The Artisans distinction on the card isn't a variation, but it does show that this card is a SP. The set is 200, with the final 50 being SP. I think I'll pass on the set build. My fave portrait in the pack among the base is the JD Hammer, because stadium background > generic background. And there's a Joey Votto for my Cancon collection. 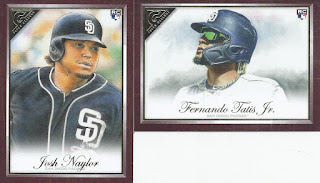 There were two wood parallels in the pack, and they'd indicate this pack maybe should have ended up on the shelves far to the southwest of me. But, the Naylor is also a CanCon card. So, maybe not. 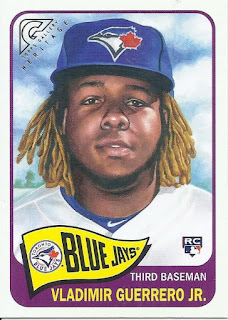 And definitely not when it came to the Heritage insert. A drawn card of Vlad Jr, with the always classic 1965 design! I may like this card even better than the Richard Urena auto I pulled from my one pack last year. And despite the fact he's all over every late release this year, it is still a lot of fun to pull any of his cards.

There you have it! If it were not for the SPs, I could see myself going for this set. Alas, 1/4 of the set being such kinda kills the urge.
Posted by buckstorecards at 03:30