12 Days of Christmas. 12 boxes in a case of 13-14 Panini Rookie Anthology. Coincidence? I think not! That makes a perfect excuse for another case break of my favourite product! 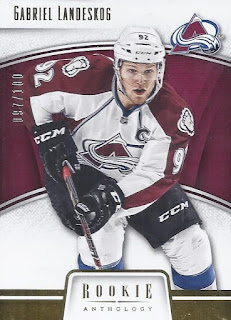 I didn't actually pull this card from the case, but it was in my COMC to-be-posted box, and felt like that a PC card would be a great way to lead into the case. 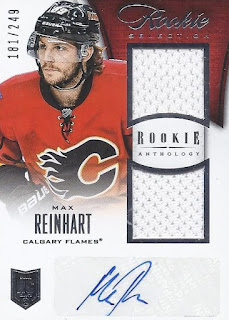 Here was the first Rookie Selection base card in the box. While three of the second-generation Reinhart brothers reached the NHL, Max played the fewest games in the NHL at 23, and doesn't appear to be playing at this point. 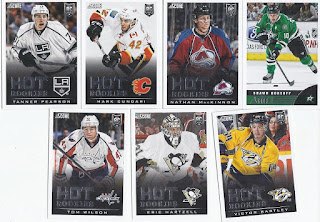 The Score cards. I actually busted these over a month ago, and in between busting and scanning, I did sent about a half dozen of these off to Shane @ Shoebox Legends for his set. So, this portion of these posts may not accurately reflect the contents of their respective box. MacKinnon is always a good one to get a dupe of. 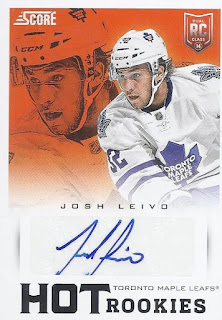 The Hot Rookies auto was one I've pulled before. But he is still active in the league, and seems to have really improved after moving on to the Canucks, and getting a full-time gig out on the west coast.

Prizm base. Not a whole lot of variety here in terms of jersey colours. 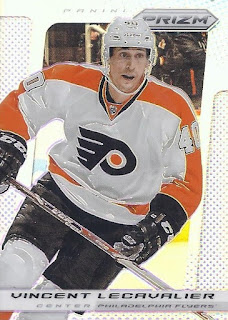 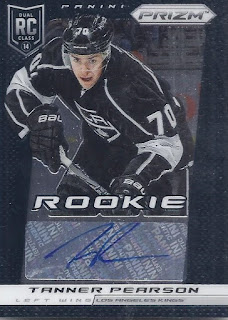 The Prizm auto is another dupe for me, and of another player who has moved on from his pictured team and is now with the Canucks. Tanner's a local player who brought the cup to town for his Day with the Cup, and, as I've written in the past, was a former Kitchener Ranger, albeit not as a player but as a stick boy. 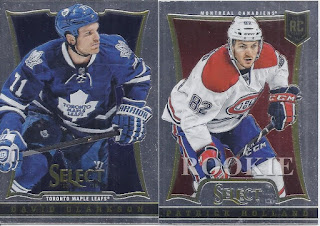 Now David Clarkson did play here, and he was part of the Memorial Cup winning team in 2003. 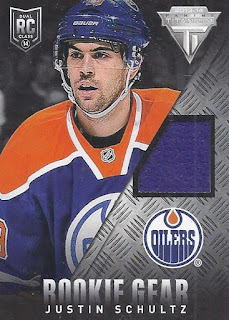 Relic card #1 is nice, and I like how the blue on the jersey in the photo almost seems to join with the actual swatch. 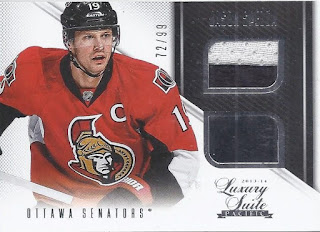 But it doesn't really compare to #2, with a stick piece and a nice seam from one of my PC players. 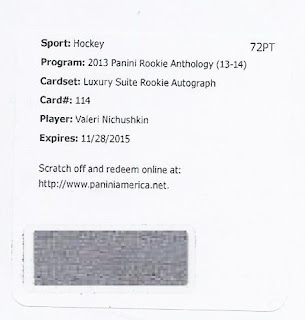 The final card of the first RA Box of Christmas is a redemption. But it looks like this did go live at some point. So I might even have this in hand at some point.

There you have it! Tomorrow, the box for Boxing Day.
Posted by buckstorecards at 05:00