Time for this hobby box fest to end. 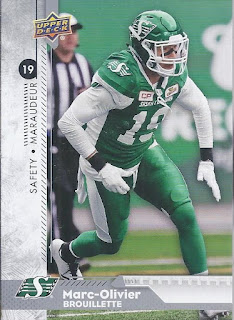 As I got to this box, I finally got hit with some dupes. In fact, only a handful of cards were needs that dropped off the list. But, I did get some dupes of guys I'd be looking for a second card of anyhow, such as Marc-Olivier Brouilette here. He's a 2/14 baby, and this is his second card in the binder, joining a card from his Alouettes days. 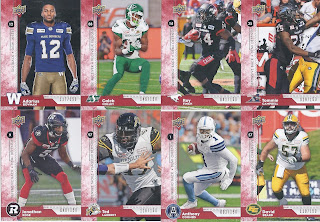 The dupes continued over here among the red parallels, as Beard, Coombs and Rose make their second appearance, having also had red parallels on the previous post. 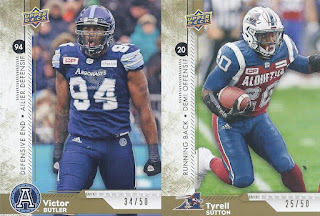 At least the golds were new. 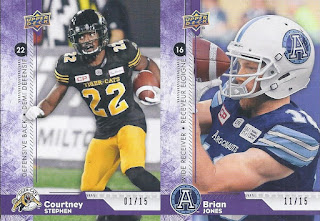 Two golds means two purples. Both of which have interesting photos. Defensive players with the ball are the football version of pitchers at the plate, and it looks like Brian Jones is making a catch with his facemask. 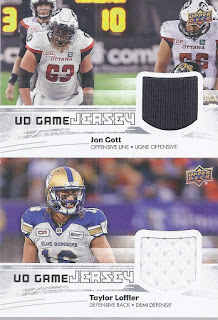 At least both the game jersey cards were of active guys! With his helmet on, Jon Gott just looks like a sentient beard. 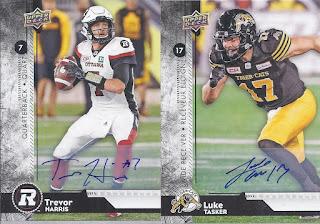 The autos here were pretty good, and were my first to feature two guys from different teams. Trevor Harris has been comfortably leading the Redblacks to the lead of a rather questionable division, and Luke Tasker makes me 3-for-3 with hits from the Ticats. If the name seems familiar, he's the son of Bills Special Teams legend Steve Tasker. This means I've acquired an auto of both father and son this year.

Despite all the base dupes, a pretty good box on the whole with the hits. By the time you read this, I'll hopefully have the needed cards updated on my wantlist.

From hobby boxes to repacks with the next post.
Posted by buckstorecards at 08:24