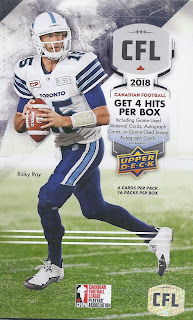 The 2018 edition of Upper Deck CFL release dropped on Wednesday, and on paper, it seemed that it might be the best since the product's debut. It had a 200 card base set, but none of it was short-printed like previous years. Each pack would also contain either a hit or a card numbered to 150 or less, so it would feel like you'd get something nice out of each pack. 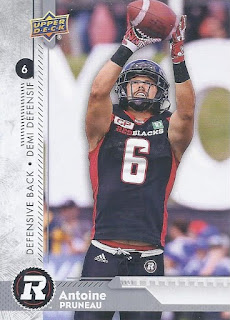 This is the base card design. The cards are entirely vertical this year. Maybe the border on the left side could be a little thinner, but that's the only real complaint I have about this design. This also marks the first appearance of Antoine Pruneau's photo in the base set. He had a card in 2014, but that made the news for featuring a photo of Marcus Henry on it. 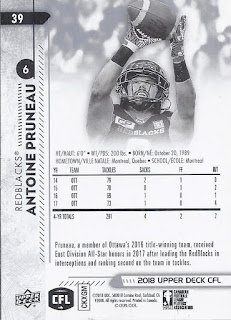 The card backs. You can't tell here, but they cut off at 5 years of stats. The photo background and design's colours change based on the parallel. Red for red, etc. 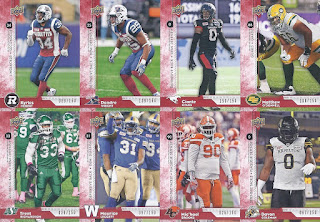 Speaking of red, here's all those parallels. Nice and bright. 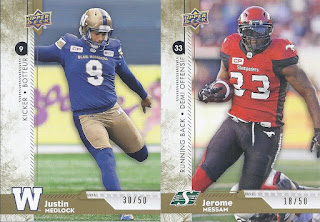 Golds seem a little more subdued. As you can tell from these two scans, both kickers and offensive linemen get cards in this release. But, with the ability to have 22 cards per team (198 cards/9 teams, with 2 checklists), UD's rosters can go a little deeper. 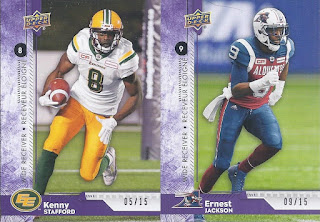 The purple parallels are the lowest numbered parallels available. They're probably my favourite of the base designs, not so much for the numbering, but the comparatively rareness of the colour in cards. 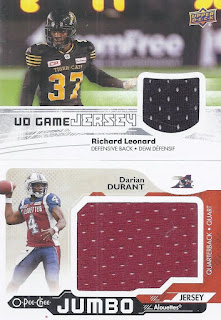 Let's see the hits! A really good start for me, as I get a Ticats swatch first. The jumbo swatches are the only appearance of the O-Pee-Chee name in the releases. The card really doesn't have an OPC feel to it, as it is super glossy, just like the regular game jersey cards. The jumbos are rarer, at a rate of about 1 every 6 boxes. 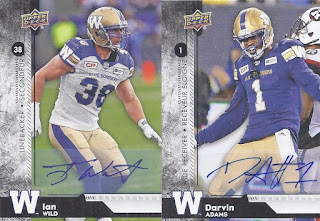 And here are the autos. I'm glad that Adams included his number on his sticker, otherwise I thought UD might have reused a sticker from his 2011. He made the highlight reels last week for a rather unique celebration, and the CFL will now allow the use of props in TD celebrations.