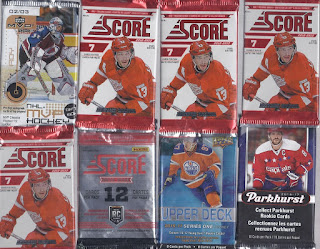 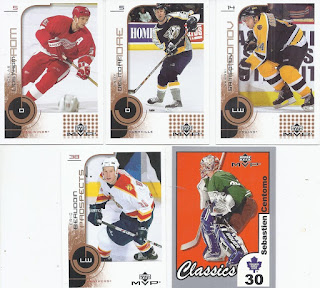 I was looking forward to busting the pack of MVP, since outside of a random card in a repack, I'd never come across any of it before. Oh yes, this was one of their border-intensive designs. It looks like it crushing poor Sergei. The Classics parallel is easily the favourite here. A St. Pats jersey? A one-game NHLer? That's my kinda card. 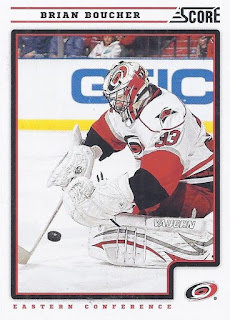 I generally go right to the gold cards in the Score packs, but figured Boucher's final base card, following a 10 game stint with the 'canes was worthy of a highlight. 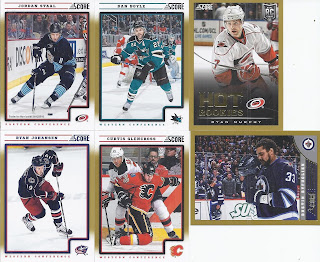 It is easily quality over quantity with the golds, as despite being outnumbered 4-2, the best cards are the gold parallel of a Kitchener Rangers alum alongside that great anthem photo of Byfuglien. 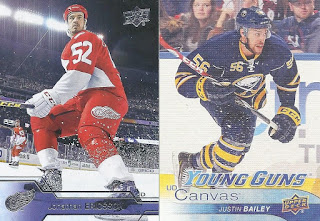 The final flagship UD had some nice stuff as well. Both posts gave me the chance to post a card featuring a Wings uniform from an outdoor game. And that Canvas Young Guns is a tough pull, landing at 1:48 packs in either hobby or retail. Bonus: He's a Kitchener Rangers alum, along with also being the son of former Buffalo Bill Carlton Bailey. A perfect card! 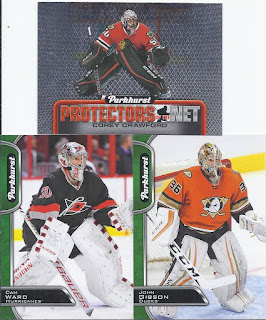 The Parkhurst seems almost an afterthought, but here's some cards for the ol' mask binder from that.

There you have it! No hits this time, but there was enough interesting stuff to make it a good repack choice.
Posted by buckstorecards at 10:12