My latest COMC package showed up last week. I had a few cards that I had to send out to trade partners, but most of the goodies were for the 2/14 binders. As usual. The timing was perfect, as I'd finally updated my spreadsheet to include a list of all the numbered cards and hits in the collection. Now if I can just get around to linking the thing on my sidebar. 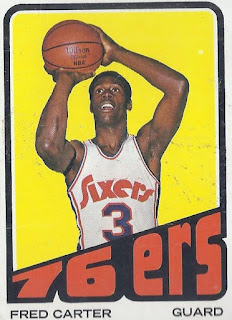 The mailer contained a grand total of two new basketball cards for the collection. Without triple-checking, this was the only vintage entry into any portion of the collection. A classic design highlights my 4th Fred Carter card in the collection. He's also one of a handful of members to have both player and coaching cards in it. 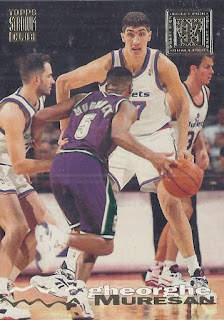 Eric Murdock would probably be well advised to pass the ball at this stage. Although I'm sure that it was Muresan that had the most panicked expression on his face of the two. This is card #44 for him. 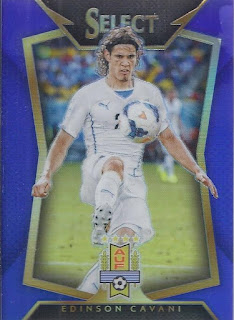 The World Cup gave me the reminder to search for some cheap additions to the miscellaneous portion of the collection. Edinson Cavani remains the leader in that entire collection with 7 cards, and this /299 card was the 7th. 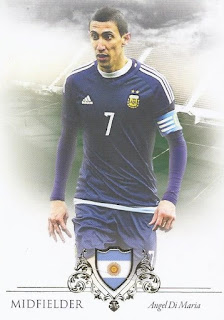 This is my first Futera card in the collection. The design might be one of the handful of cards where I like the end result of removing the actual background to the photo. This is only my second di Maria card. 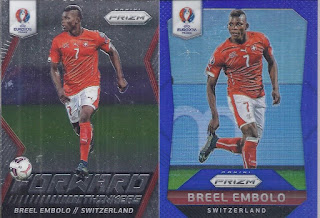 That means he's tied with this newcomer to the collection. I'm not checking the years, but at 21, Breel is probably the youngest soccer player in the collection. That should leave for plenty of years for him to move up the ranks.

So, there's a few new additions. With this small dent, I still have about 50 more to get to in future posts.
Posted by buckstorecards at 13:29