This would be the final envelope of my recent Sportlots 4 packs. 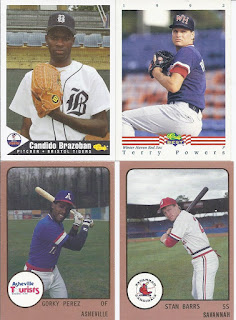 It contained a 4 pack of minor league 2-14 babies. Candido Brazoban is the most interesting one to me, as he joins Damaso Marte and Vicente Garcia as the perfect matches is the collection, matching both the date and the year. The back of his card, though, lists his birthday as 2/4, but since both baseball-reference and a Fleer ProCards issue list him as 2-14, so I'm still counting him.

Of the others, Terry Powers sounds like the name of an independent wrestler who works the opening match, so there's also that.

Next up, I'll make a quick return to my COMC box with more 2/14 new faces, and the non-baseball portion of their recent mailer.
Posted by buckstorecards at 08:54