Along with the free Hockey Card Day pack, I opted to bust a box of one of my favourite boxes of the 10's, - 13-14 Rookie Anthology. 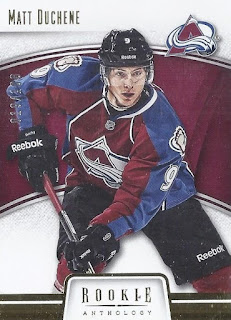 While I generally don't highlight the base cards with this, a gold parallel /100 is always worth showing off - especially a future Senator. 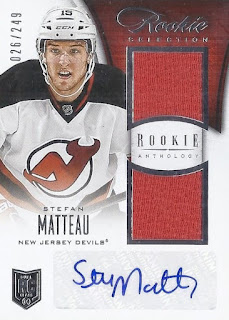 These are also considered to be base cards. This is the second Matteau of I've pulled, but since I traded that one away not long after the pull, I'll gladly welcome a replacement. Stefan's still on this side of the Atlantic, and has seen action in Vegas this season. 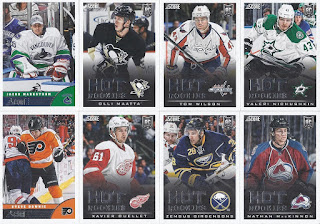 I don't need any more Scores to complete the 100 card Update set, but at least the MacKinnon is a good dupe. 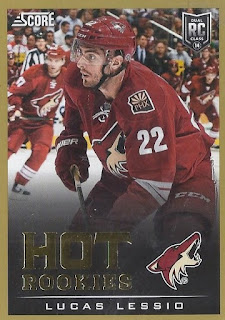 A gold parallel as well. 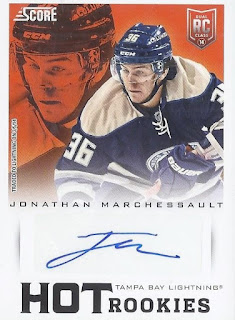 The second hit of the box is also someone who's seen action with the Golden Knights in 17-18. He's actually done quite well, and is on a pace for slightly about a pointper game.

Prizms. D'Amico and Trouba are both new to me. And even Jagr dupes are still nice.

Morrow and Bellemore are new to me among the Select. 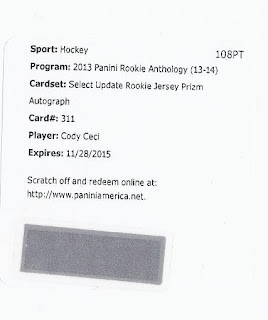 As is this redemption. Sorta. I have the regular one of these, and now have the /99 parallel. Since the former one was live not long after the pull, I can actually imagine this one coming through. 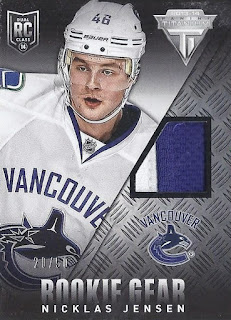 Just hits the rest of the way home. Starting off with a 2-colour prime piece of a Nicklas Jensen sweater. Nice, but... 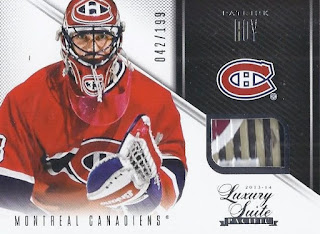 here's a far more interesting relic. A nice mask binder addition with a relic of a legend. The bad thing about this is that I picked up this off ebay about a week earlier: 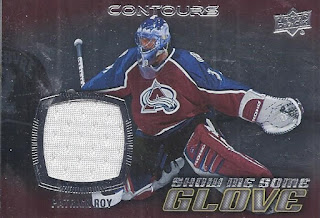 Great timing! At least one is a stick and one's a jersey (although shouldn't Show Me Some Glove be a glove relic?). 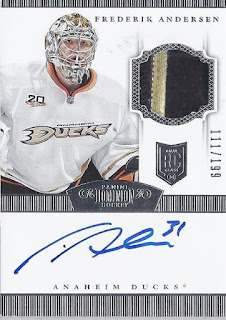 And to end it, a card from Dominion. A nice patch to go with an on-card auto, its just a shame he's with the Leafs now. But, with him putting forward a really great season in the net, this is a nice pull to end this with.

Next up, my second box of the weekend, a hobby box of Series 2.
Posted by buckstorecards at 10:50