Topps comprised the smaller portion of the collection, but I still have a handful of cards to show off. 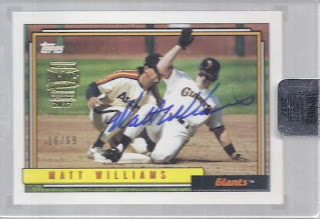 First up was hit random of Archives post-season. While a Matt Williams isn't the best possible result, at least it is attached to an interesting photo featuring a somewhat rare pose for baseball cards, and a nice look at the Candlestick outfield/fences. 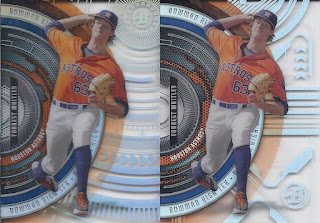 The randomizer landed on Houston for me in a Bowman Tek break. That meant I was chasing Forrest Whitley. Two base cards came my way, one the regular one, one parallel. 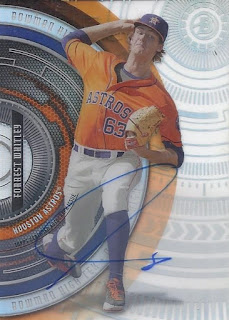 And I got an auto of his as well. Wow. That is atrocious penmanship. Having it larger than they typically are doesn't make it any better. I dare you to try to parse a name out of that.

But there you go! I'll slip back into the Field Access box for a bit, since I really should try to finish up December Stacks of Wax in December.
Posted by buckstorecards at 09:32