More group break goodies showing up, this time from the first NBA release of the new season. The Raptors did not have a draft pick this past draft, so the one benefit of that is they will be cheap in group breaks as a result. Undrafted rookie Deng Adel (with the G-League team) did have a card in contenders, and I'd love it if Montreal's Chris Boucher (two-way contract) gets a card in something.

But, that's enough of that. Let's see the team. 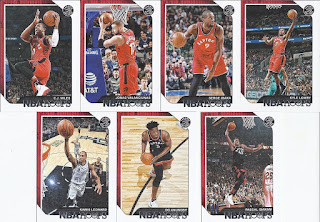 This is the base set. As I said when I busted a few packs, it is really nice to see some variety in the photo selection this year. I love the angle used on Anunoby's photo. My only beef - no Fred VanVleet base card yet. All his Raptors cards to date are autos, with his only non-hit cards being Wichita State cards from 16 Contenders. 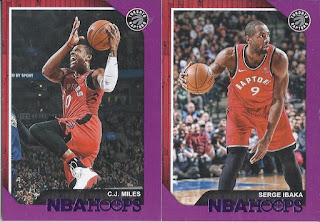 Parallels! These purple ones would look even nicer if there was a photo of them wearing throwbacks with the Dino logo. I don't recall them wearing those last season, though. 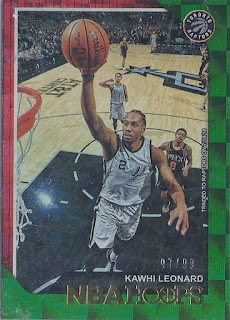 You want some more numbered cards? Here's some commemorating their first round victory over the Wizards. Only one more card to complete their playoff run! 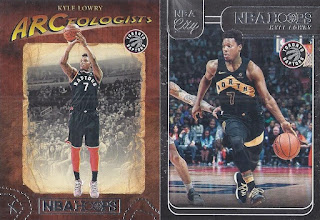 Just a couple of inserts to wrap this post up. A punny card, but more importantly, the NBA City insert gives a great look at their alternate jersey.

And that's it! No autos, but the lack of any rookie made it a tougher pull. I'll take their 8-1 record so far as a consolation prize.
Posted by buckstorecards at 09:18