From a new repack, to one I regularly show off - a flea market brick. As with the usual ones, these are $5, and contain about 50 recent cards from mostly mid-range sets, with a hit in the middle. 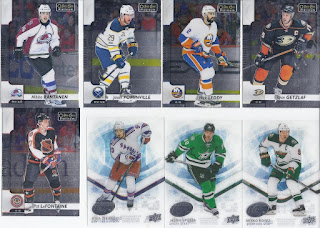 Out of the gate, some Platinum and some Ice. The decision to make some of the base cards All-Star game themed resulted in some fun cards in the set this past release. 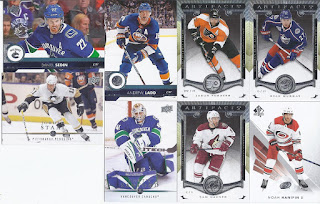 Those flagship base cards were about as low-end as the cards got in this. 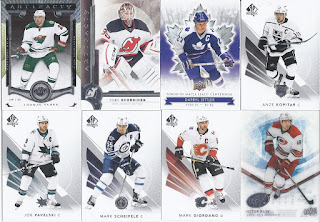 There were a lot of Artifacts in this, and a lot of SP Authentic base cards in this one. So, even being a Leafs card, that Sittler was a nice break. I probably would have loved that set and its design were I Leafs fan. 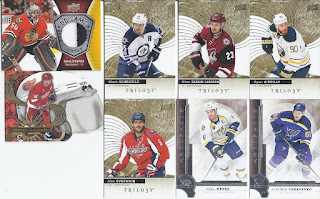 There's the hit of the brick. A two colour swatch on a card for my mask hits binder. Great! That die-cut of Shanahan is pretty nice as well, and I may even like the acetate design element to it better than the actual hit. 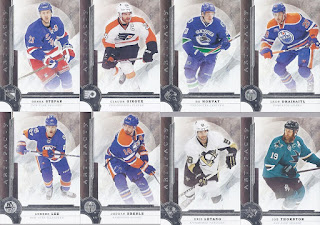 As I said. Lots of Artifacts in this. Although I don't mind too much, since 16-17 was one of my favourite designs for the release. 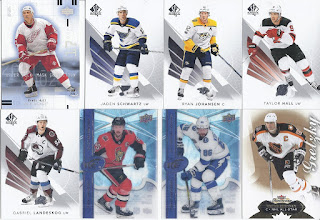 And here's some SPA. But this grouping also brings lots of interesting stuff. A Sens card. A Rangers alum. Gretzky. And a set I don't see much of in this, UD Mask Collection. 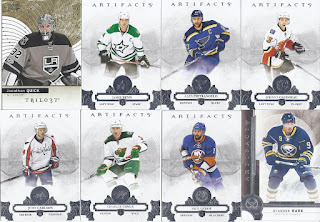 Might as well end this with some more Artifacts, even though last season's bare bones design may have been one of my least favourites.

But there you have it!
Posted by buckstorecards at 09:18