As this post goes live, I'm on my way to Edmonton for Grey Cup Weekend, and the final CFL city to visit drops off my list until there's an expansion further east. So, everything is now pre-written for the next 4 days, and I have picked up some boxes through Blowout show off. 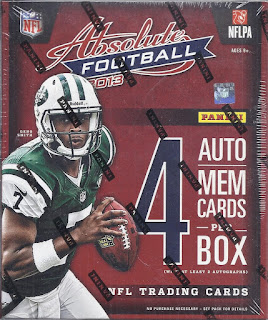 The packaging for this is strange. There's 4 cello packs in this, but they're inside mini-boxes that look similar to McDonald's pie contenders. Each mini-box/pack holds 5 cards. 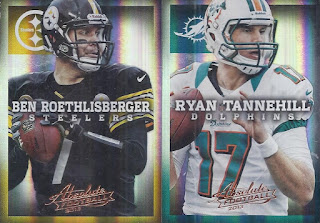 There's two regular base cards per pack. They're nice enough, and I like the partial team colours on the border and the team logo in the upper corner. 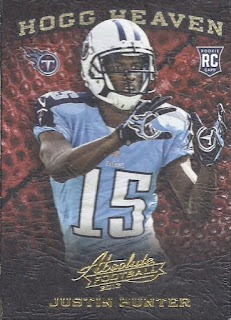 There's also one Hogg Heaven per pack. These have somewhat of a leather feel to them. 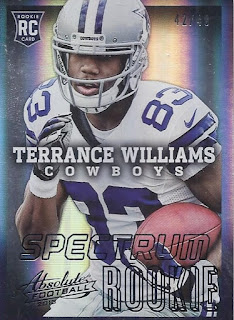 There's (at least) one numbered card per pack. This one in particular is a black parallel. 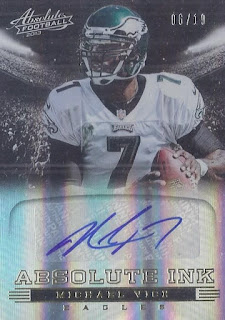 There was a point where a Vick autograph /10 would be a hell of a pull. It still hasn't come back. 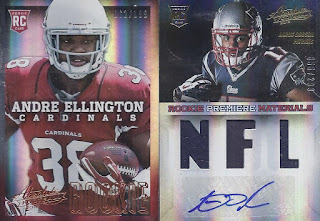 Pack 2's numbed card and hit. Neither of these two guys are still active, a common theme with 2013's rookie class. 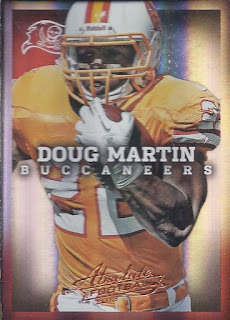 I didn't plan to include any more of the unnumbered base cards, but I find it hard to resist the urge to show off Creamsicle jerseys. 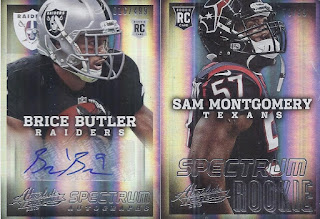 And the inserts. The Montgomery is a silver parallel. 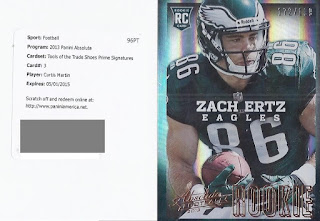 Your final inserts. Surprisingly, all four of the hits in this turned out to be autographs. Eventually. I'm looking forward to the Curtis Martin autograph should it come my way at some point, since he has a gorgeous signature, and I'm kinda interested in what specifically a prime shoe relic is.

And that's box 1. More football tomorrow!
Posted by buckstorecards at 10:26