Worth the Shot Part 2

This will be the final group break post for the time being as I hope to go repack intensive with the Expo on Friday. I grabbed a pair of slots in a case break of 2018 Archives, picking up the Mets (and getting no autos or parallels) and the Indians.

Why Cleveland? The slot wasn't too expensive, and they had a couple of names on their checklist that I thought would be fun to add to the collection if they came up. 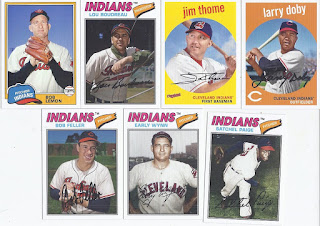 The base cards for Cleveland totaled 14 cards, and even split between active and retired players. I won't scan the former, but here are the latter ones. That's a really nice mix, and that Paige is a beauty. Then again, there really are no bad Satchel Paige cards. 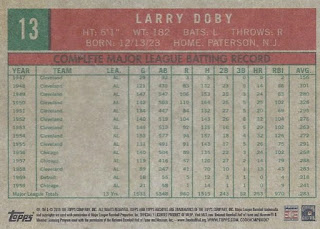 And one of the Larry Doby cards was the Venezuelan back parallel. I landed a Hank Aaron one in the blaster I opened, and that's a pretty good pairing. 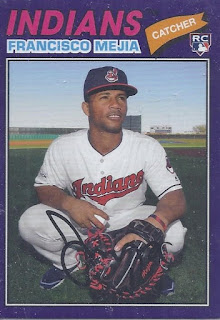 Only one numbered parallel - this /175 of Mejia. 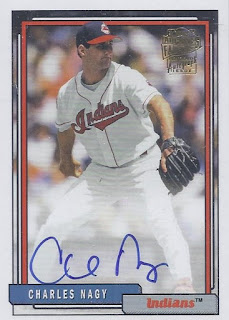 The autos available for Cleveland were an interesting mix. I landed a pair of Charles Nagy ones, this one (which isn't as poorly centered as my lousy cropping job makes it seem) and a silver parallel /99. 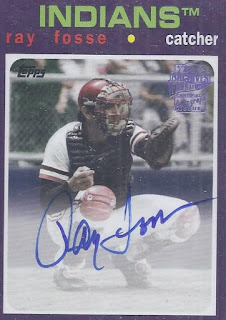 There were two autos I was really interested in adding on the checklist for Cleveland. One was Jose Mesa, and this was the other. That's one-half of one of the most famous plays in All-Star Game history, and the only one who Topps pretends still existed. This drops to /150 from the regular parallels, and yes, the stamping on the card has a purple tint to it. If I'm batting .500 on autos, that's a good way to do it, although I would have been just as happy with Jose Mesa.

And there you have it! Back to my comfort food of repacks tomorrow, and probably for a few days afterward as well.
Posted by buckstorecards at 06:04