Back to the boxes. 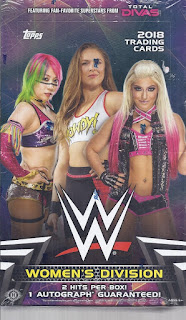 And let's look at some cards from the distaff side of things today. I also included a blaster of this. Looking at the packaging, I'm not sure who came off worse in terms of Topps logo placement - Ronda or Alexa.

Here are the base cards in the 50 card set. The first portion is for current stars, with NXT prospects and legends being the final cards in that portion of the set. No complaints, but I wish they'd used a little less of the stereotypical pink.

Memorable Matches and Moments also gets 50 cards. There's 10 cards each for Smackdown and Raw, with the Mae Young Classic bumping things up for that portion to 30 cards. 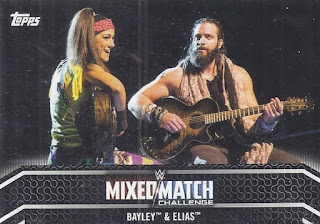 The Mixed Match Challenge gets one card per pack in the hobby box. There was perfect collation here for this 24 card insert set. 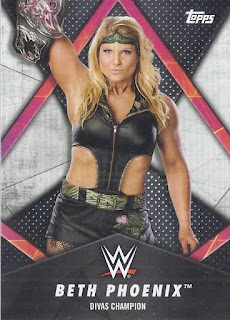 The blaster one-per-pack exclusive is a championship history subset. This was the only non-hit portion of the set that I didn't complete. 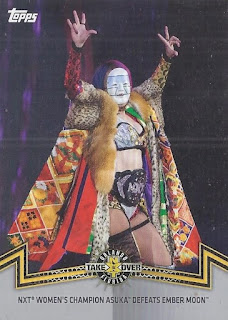 Parallels seem to be one per box. Silvers, like this Asuka, are /50. 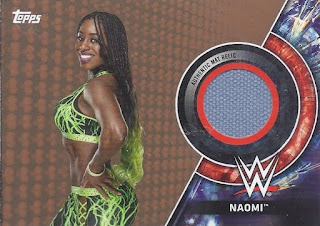 Off to the hits! This was the blaster hit. This mat piece is from the Royal Rumble, although you'd have to turn the card over to match canvas to event. 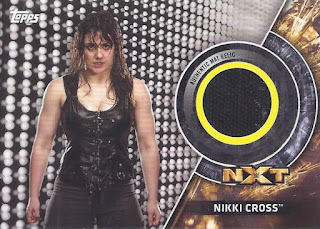 And this one is from NXT War Games. These were also used in Heritage, with my relic hit in that being a Drew McIntyre. 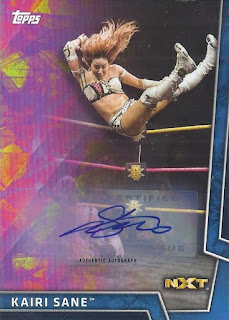 And my auto! The Pirate Princess! That's a sweet action shot that cancels out the stickergraph nature of this. Perfectly placed as well. The blue parallels are /25. No complaints about this one, especially since I didn't get a dupe of a previously acquired lady.

And there you have it!
Posted by buckstorecards at 10:13