I've never really been that crazy about Young Guns, so I was pretty disappointed to find this particular Expo, more than ever, focusing on Series 1 dropping. Very few singles on the whole towards the lower end of the spectrum, so I ended up buying more wax than I would have liked, and have spent the past 48 hours or so slowly busting my way through them. This might have been the fewest singles I've ever bought at one of these. 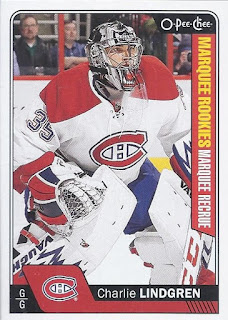 I probably overpaid for this, but it was the set completer for the 2016-17 O-Pee-Chee set. Lindgren has been back and forth between the parent club and the AHL for the past several season. So, it isn't a big card in terms of the set, but it was for me putting this set to bed. 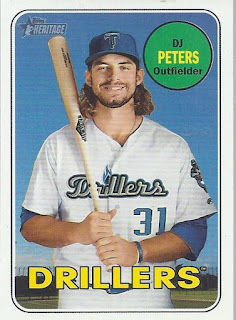 What's better than finishing one set? Finishing two! Technically, this isn't finished, as there are about a dozen SPs I need, but I'm happy enough with this being the finale.

And there you have the first two acquisitions I'm showing off from the Expo. Probably Limited with tomorrow's post.
Posted by buckstorecards at 11:04