The most recent pick-up a pair of Dollarama Surprise Bags was interesting. 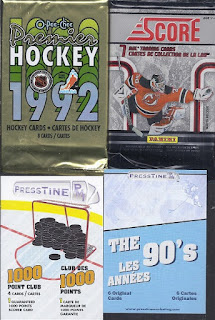 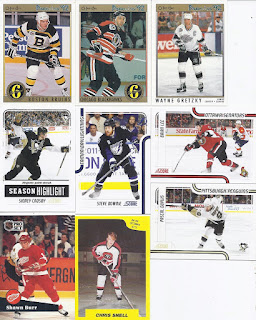 Premier's release was loaded with photos from the alternate jerseys from that season, which means that even if you won't get anything valuable from it, you'll get some interesting cards. A Gretzky and a Crosby in the same repack? Nice. Brian Lee was the only Sens content from this break. Dupuis was the glossy parallel in the Score pack. There's a couple Kitchener Rangers alum in this, as well as proof it wasn't just 1991 Fleer that brought the yellow. 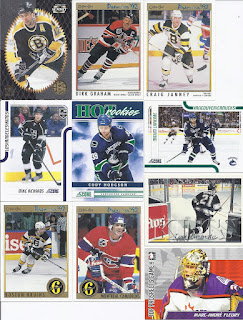 More anniversary jerseys in the second pack. The real interesting stuff are the two horizontal cards in the lower corner. Although Fleury's Penguins career was already under way at this time, this is a nice way to add his Cape Breton Screaming Eagles mask to my collection. And that Granato is quite the interesting photo choice.

Both were a lot of fun to tear into, but the MAF/Granato push the second of the repacks into the lead in this battle of very similar competition.
Posted by buckstorecards at 11:55