In this case, the hockey randomness comes from a group break consisting of boxes from 2017 releases. It included Series 2, Platinum, Ice, SP Game Used, SPA and Black Diamond. I've only busted two of those, so it would be a nice way to get a chance at some new designs for the collection. 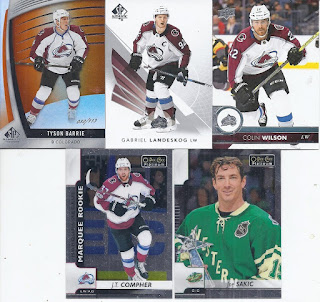 You got 2 teams per spot, and I'll recap them in alphabetical order starting with Colorado. While there wasn't anything major among the cards, I do get my first look at SPA's base design this year while adding a new Landeskog to my Rangers alum collection. I really like the addition of All-Star themed legends cards to the Platinum base set this year, giving collectors a very unique Joe Sakic. 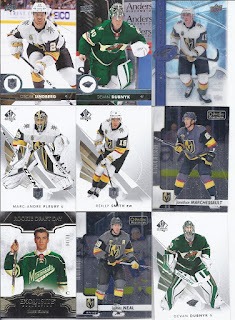 An uneven number of teams meant that the Golden Knights and the Wild were a combination slot in this. The big card here is the Exquisite insert from the Black Diamond box, but there's still a nice grouping of base cards to go alongside it. If only I was a Reilly Smith super collector. 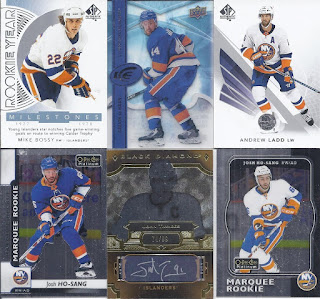 With Josh Ho-Sang being one of the more intriguing rookies at the start of the season, I though the Islanders spot had some potential. While I did land a pair of his cards from Platinum, the big card of the break is sandwiched between them. A John Tavares auto? There's a keeper. I don't really care that it is a sticker, since it does work nicely with the design. 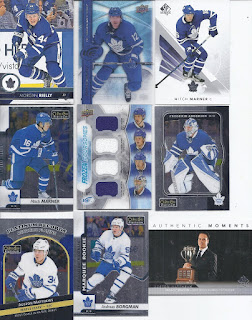 This wraps up with the Toronto spot. A nice variety of cards, and although I'm not a fan of the team, the blue and white contrast on the relic card does look real nice.

There you have it!
Posted by buckstorecards at 11:03