And the recap portion of the Expo gets underway in full after a teaser yesterday. For some, you'll have to wait until they show up on other blogs, but I still got a few goodies for myself. I'll start off the recap over the next few days with some boxes I busted. 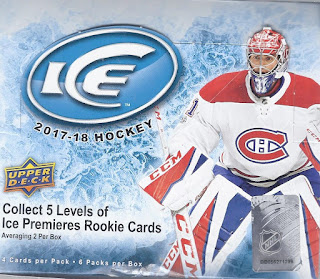 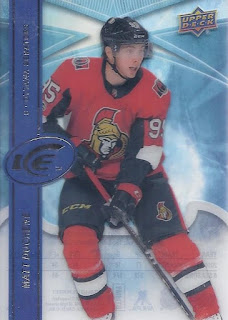 Here's an example of the base cards, in all their acetate-ness. He also made an appearance in Platinum, so this isn't my first Matt Duchene Sens card. 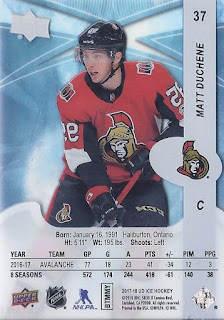 The card backs are what you'd expect. The reversed photo is a nice touch. 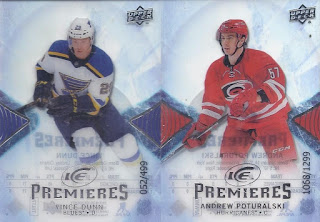 As advertised on the box, I landed two Ice Premieres base cards, spread out over 2 levels. The higher a card is numbered, the less hyped the rookie is. Poturalski is Level 5, while Dunn is a Level 3. 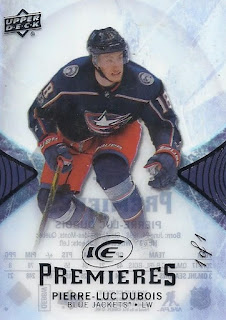 A third Ice Premieres card? That's not what the box advertised? Oh wait. This isn't a base card. This is a black foil parallel and, as you see on the side, that's also a 1 of 1! The black parallels are also the only parallels among the Ice Premieres. Dubois is considered a Level 1 rookie, so his regular cards are out of 99. 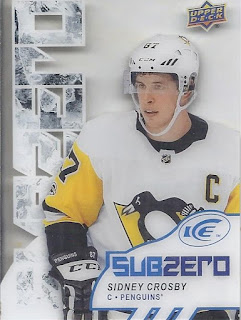 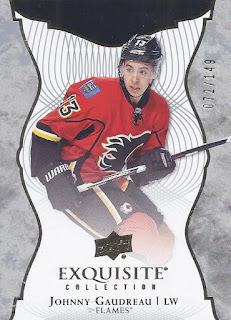 You're promised an on-card autograph, and either an Exquisite card or a relic card in the box. I landed the former, with a numbered base card out of Exquisite. I like this better than a plain white swatch. 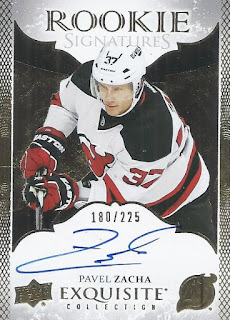 More Exquisite with the autograph. This is actually an update from last year's release. Zacha was one of the more hyped rookies entering 16-17, but really has yet to pan out at a level worthy of being a 6th overall selection.

But still there's more. If you busted the box of Ice at the Expo, you got a bonus pack with two Midnight parallels from Series 2, as well as an extra insert. Let's check that out too! 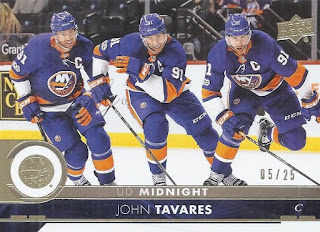 First up, a pretty nice name to get a low numbered parallel of, and combined with a multiple image on the card itself. 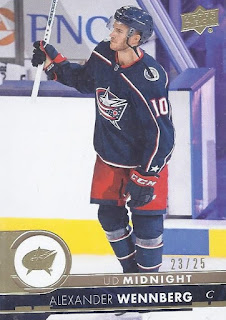 Not quite the name on #2, but an interesting photo as well as Wennberg is named one of the three stars of that particular game. 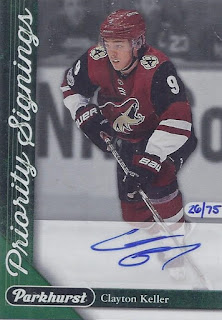 And from an auto of a pretty hyped rookie going into this past season. And he's met expectations with a solid rookie season. This is a sticker autograph, but the design of the card does a good job of hiding it.

And there you have it! Up next, a box of personal favourite 13-14 Rookie Anthology.
Posted by buckstorecards at 08:58