The Not-To-Distant Future is NOW!

Flashing back to the Expo, I pulled the 1/1 Pierre-Luc Dubois at the show. When I sold it on ebay, it more than covered all my outgoing funds for that day, with some left over. Of course, that means 'MORE CARDS'! 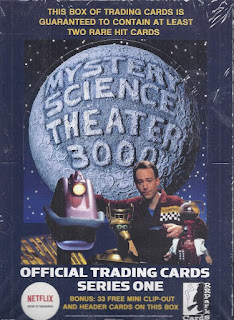 No sports this time! MST3K BABY! 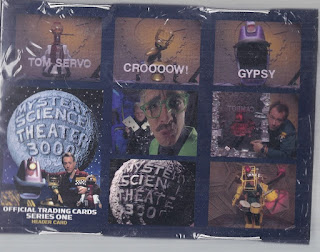 The box has cards that can be cut out. 27 of them in fact, with these from the box bottom being a sampling. I left them as is as the box is a perfect way to hold the cards after collation. 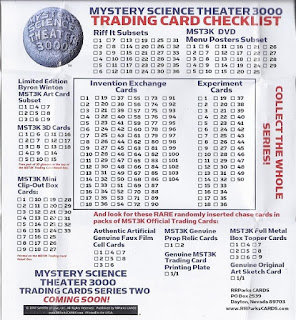 One last great thing before I get to the actual cards. The individual packs have a classic wax pack feel to them, opening broadly like anything from the 80s and beforehand. Even better, when you open them, there's a checklist available on the inside of them. 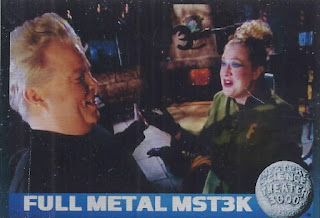 Before opening the packs themselves, there's a metal box topper. It isn't really a box topper in the usual sense as it is the standard 2*3 size. 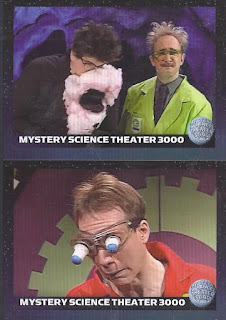 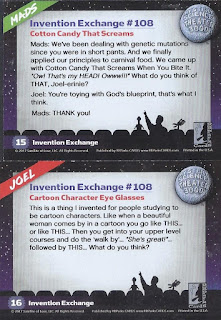 The majority of the cards consisted of the Invention Exchange set. There are two for each episode, one for the Mads and one for Joel. 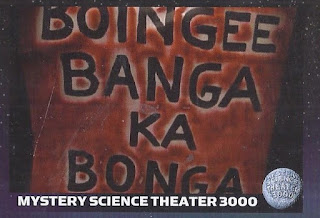 Episode 305 gets multiple ones, as there was a back-and-forth exchange with various sound effects. 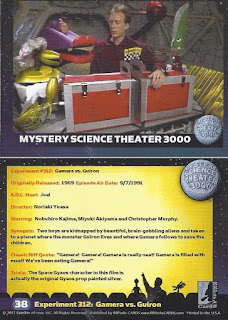 Second most common were the experiment cards, with one per episode. The front has a screenshot from one of the host segments, with the back having the recap of the episode. 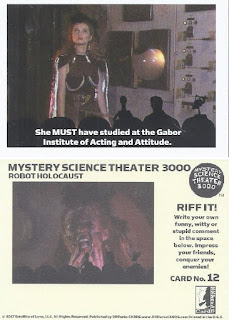 Yes, Dahg Wan! Riff It gives us the movie sign, with this one covering four season 1 experiments. At 36 cards in this set, evenly divided with 9 for the featured episodes (Mad Monster, Women of the Prehistoric Planet, The Corpse Vanishes, Robot Holocaust). Perfect for pages! 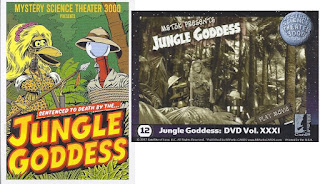 If you've bought any of the Shout Factory DVDs, you're familiar with the mini-posters that were with them. Many of the ones from Seasons 1 through 3 are represented in this insert set. The other side of the card is a screen from the DVD menu. 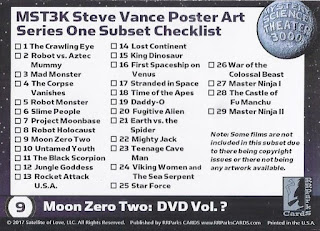 The exception is for Moon Zero Two's, which had a checklist since I'll assume the DVD hadn't quite dropped at printing time. As well as the likely answer to the "Why no Gamera posters?" question. 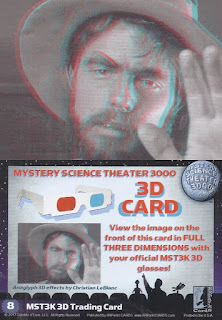 3D Cards end this portion of the recap. You didn't know you wanted a 3D Torgo card until you saw this, right? This seems to be the only portion of this set that has much content beyond the first 3 seasons. There's also a 3D Trumpy, some more posters and host segments. Glasses are included. A nice thing is that all of these cards fit perfectly in one of those empty Walmart Hockey Power Cubes. I'm tempted to move them over into binders, but that box is so perfect, as it can comfortably hold the cube, as well as the numbered inserts/hits in top loaders.

Sketch cards can also be found throughout the box. I landed 3 of the 9. The others were Pearl, Frank, Dr. Forrester, Gypsy, Bobo and Servo. 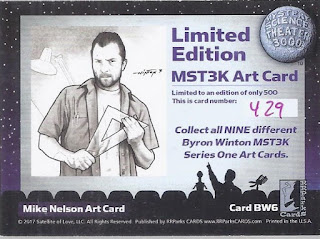 And now, the hits. 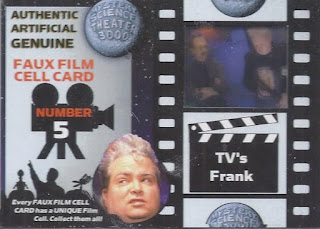 Neither were hits in the traditional relic/auto sense of the word in sports cards (relics are possible, though), but they were both really nice. Up first, a film cell that is Authentically Artificially Genuine! The best kind!

And how do you make the sketch cards from earlier even better? 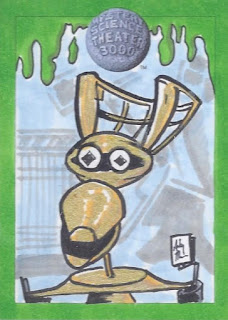 1/1 Sketch card! AWESOME! Even better that I'm more a Crow than a Servo to land this one.

What do you think, sirs?

Pimpin' is easy! Real easy! If you think these cards aren't poopie, go get some! Boxes are still available!
Posted by buckstorecards at 04:19