Box #3 of the day was another one familiar to me - 2010 Between the Pipes. I'd busted a pair of them recently, and was working on the base set. While I did some major damage to it with only 4 cards needed for that, I'm just going to show off the inserts. 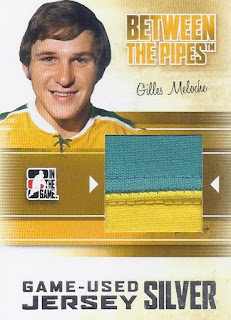 The first card I posted out of box #2 was a Gilles Meloche Golden Seals relic.  I'm a magnet for those, as here's my second one. The first one was the base version, but here's the silver version in all its two-colour prime glory.  Although not numbered, the silvers are limited to 30 copies.

And if you like hits with Gilles Meloche and defunct teams, stay tuned until I post some of the random hits from the day. 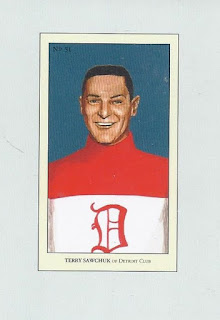 The 100 years of Collecting subset makes another appearance in this box, and it is a nice sorta retro-ish Terry Sawchuk. 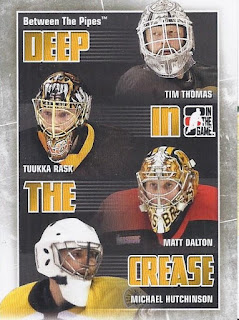 The Bruins goalie depth in the 2010 season is highlighted here. The first two need no introduction. Dalton never made the NHL but Hutchinson has seen action in Winnipeg, although his only time in a Bruins uniform was on the bench. That was still enough for him to make an appearance in the 2012-13 releases as a Bruin. 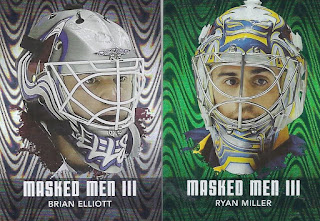 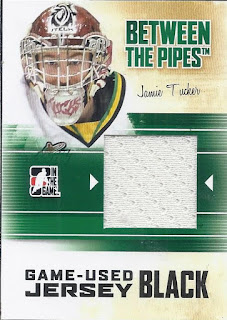 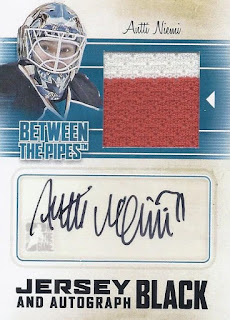 A great segue into the autograph portion of the set is a card with both. The colours seem peculiar for a Sharks hit, but the reverse of the cards states that it is from a Rockford Icehogs jersey. You'd think they'd at least get a Chicago jersey.
Niemi's leveled off from his early years, but is still playing in the NHL, and saw action with Montreal, Pittsburgh and Florida. 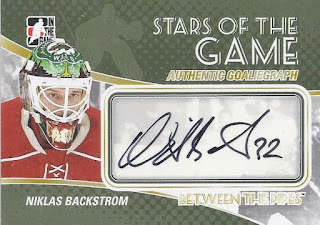 The boxes I've busted split the hits between a veteran and a prospect. This one was no exception, as here was the veteran. 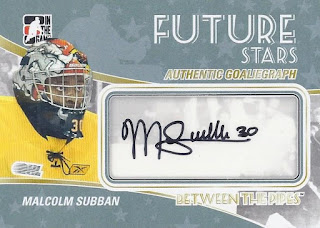 And here was the prospect. Malcolm changed up his auto to an initials-only autograph, and the only ones with the full last name are some of his OHL-era ITG releases. That makes this an especially nice pull. That's a great look at the old Belleville Bulls logo on the mask as well.

And there you have it! The final box from the show goes next, and it is some more ITG with a box of Enforcers.
Posted by buckstorecards at 09:56