Who needs a blog bat-around when a skate around would be so much more fun? I'll put together a full roster out of my hockey autographs, with a definite personal bias in some cases and a desire to mix in some active players. I'm going to ignore positions for the front 3, and just get 12 forwards, 6 blueliners and 2 goalies, and then show them off in random order. Certified autos only as well - no IPs, so that keeps Scott Stevens out of the 6. 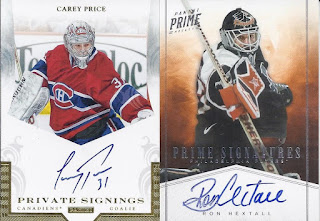 It wasn't until I started on the goaltender position that I realized how much that PC was more about the mask photos than the hits, and even then, there was a lot more relic content than auto content. Still, this is a pretty good twosome. 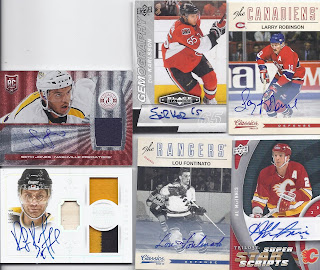 There is definitely some bias here, as all of these can be tied into my PCs. A pair of Kitchener Rangers alum with MacInnis and Robinson, a Sens card, a penmanship card, a Bruins card, and Seth Jones. Seth Jones? He's the son of former Raptor Popeye Jones. Which does warrant a PC appearance. It's a good thing I don't have any Darnell Nurse autos, since his status as son of a former Hamilton Tiger-Cat might have got him in as well. 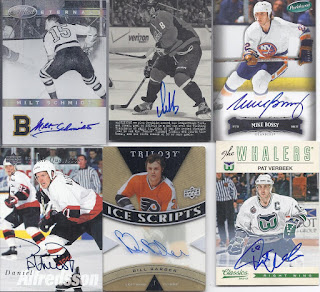 Some more bias here as I start the forwards. Milt Schmidt has local ties as a member of the Kraut line. In fact, there's a boyhood photo of him that is just around the corner from my place. The buildings in the background of that are all still standing as well. You knew Alfredsson would make my list, along with a third Rangers alumni. Verbeek's a guilty pleasure player of mine, and Bossy and Ovie's placement here were shoo-ins. 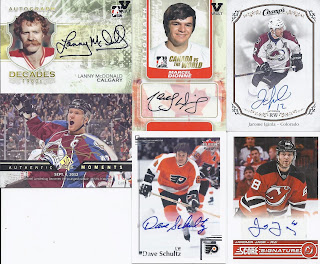 Another one of my favourite players makes an appearance in the second grouping with one of hockey's most famous moustaches. Rangers alumni #4 on this list appears with Landeskog. Dave Schultz is, like Verbeek, one of those guilty pleasure players. There's two of the NHL's top 5 goal scorers in this group. Perhaps the rush of it being a recent pull makes Iginla make the list ahead of some of the honourable mentions, but that's just me.

And just for the heck of it, here's how I acquired all the cards.

And there you have it!
Posted by buckstorecards at 06:59