I had enough of these to do a theme post for my second-last post recapping acquisitions from the show. 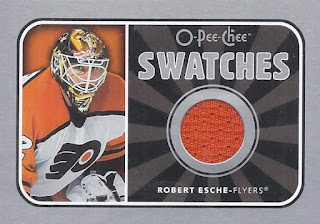 Only one relic picked up, but the bright orange swatch really stands out nicely, and it is matched up with one of the many musical themed masks that Esche sported throughout his career. 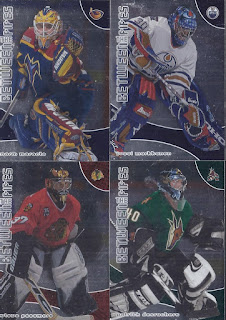 A little bit of variety out of 2001 Between the Pipes add some less well-known names to the collection. Markkanen might be the only one of these four that were previously in the collection. 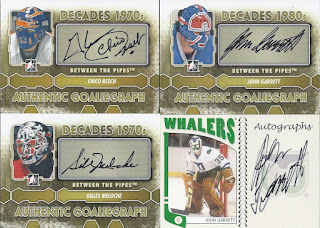 Next up, a bunch of autographs from ITG releases, mainly 2012 Between the Pipes. I'd picked up the Whalers autograph to send along to Shane @ Shoebox Legends, but realized after getting home it was a dupe. I'll still give it a good home, along with all of these other 70s and 80s masks. That's probably my first Cleveland Barons hit, making Meloche the featured player on both my first Barons hit and my first Seals hit. 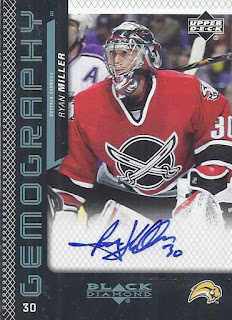 Ryan Miller is one of the guys that doesn't seem like he's been in the league for as long as he has. He was already several years into his career when this 2006 card was release. And you get a hint of the slug logo that was yet to come mixed with a third jersey as the image. The mask does co-ordinate nicely with it, and Miller does have a nice looking signature.

In fact, all of them in this post have nice, busy signatures.

A little bit of this, and some of that to wrap up the posts tomorrow.
Posted by buckstorecards at 08:57