I wasn't originally going to buy this, but after the 1/1 PLD pull, I figured I'd treat myself to a box of another favourite product. The collation in this was pretty odd. I'll start with the base cards. 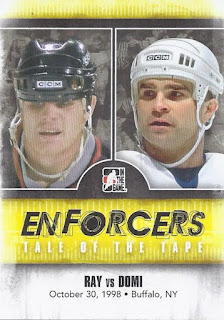 Up first, a Tale of the Tape with 90s tough guys Rob Ray and Tie Domi. 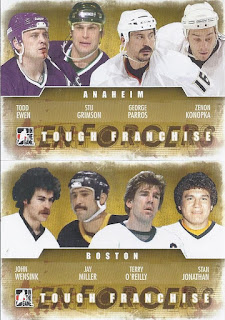 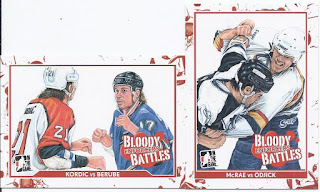 And some painted 'Bloody Battles' cards.

I thought these seemed familiar.

These were the exact same 5 base cards from my first busting of the product.

Fortunately, the hits weren't the same. 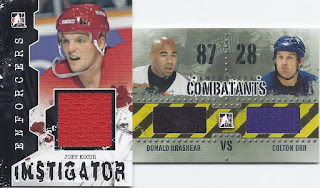 Here's the relic content. That red Joey Kocur swatch was worn while he was putting up 2519 PIM over his career. Donald Brashear passed that with 2634 while Colton Orr spent a mere 1186 minutes in the NHL sin bin. 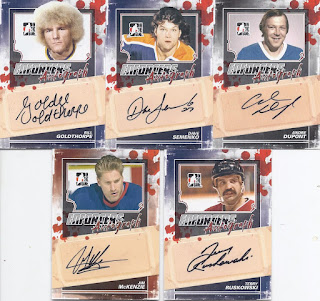 There are a couple dupes of autographs I've already acquired here in the Semenko and the Goldthorpe, but those were picked up on the secondary market. Goldthorpe never saw the NHL, but was the inspiration for Slap Shot's Ogie Oglethorpe. He did play a bit in the WHA, with 87 PIM. The late Dave Semenko spent 1175 minutes in NHL penalty boxes and 298 in WHA ones, and is best known for protecting Wayne Gretzky during the Oilers days.

For NHL penalties, Andre Dupont is the winner among the autograph class with 1986, followed by McKenzie's 1736. But, if you count WHA minutes, Ruskowski 761 minutes combines with his 1356 NHL minutes for the overall lead.

That's a respectable 7399 minutes of chaos caused by this autograph group.

And there you have it!
Posted by buckstorecards at 12:10