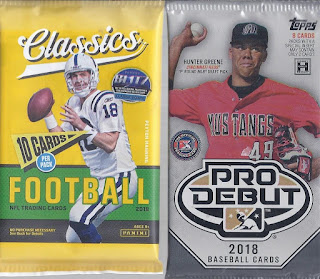 I hadn't really had much of an opportunity to look around the LCS lately, but at least got the chance to bust some of the new releases. They also had some SP Authentic, but since I'd gotten a sampling of that from the group break earlier this week, I opted for these two.

I think the football came out before the baseball, so I'll start with that.

The base cards. It looks like there's 8 of them per pack, with 3 being current players, 4 being retired retired players and 1 being a rookie. Here's the pack's content from the first category. Sherman is easily my favourite in this pack, since football cards with a defensive player holding the ball are nice rarities. 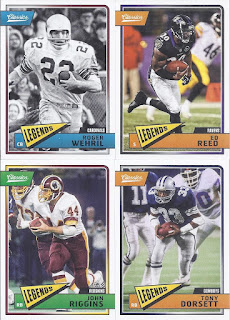 The Legends/Retired base cards. The greatness of the black & white photo is offset by the fact the guy's lasy name is Wehrli. 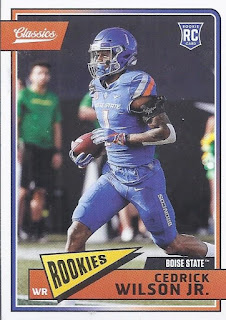 Your rookie. If these were not short printed at this level, I could see myself trying to build this set. But, with this being 100 cards and there being 14 packs per box, I couldn't justify it. 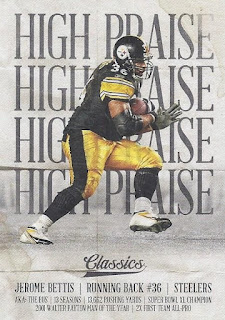 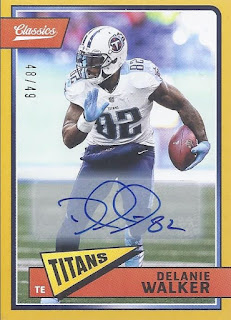 And the autograph. Given that most sticker autos tend to be NCAA guys in early releases, getting one of a veteran is a pleasant surprise. 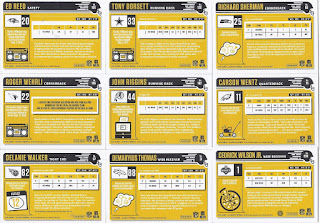 Since the backs do have an old-timey vibe with a random factoid related to the player, I figured I'd highlight them as well. Also, note that Wehrli's name is spelled correctly on the back of his card. 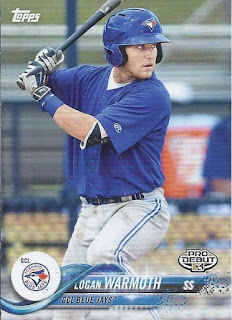 Off to Pro Debut, which opened up nicely with a Blue Jays card. 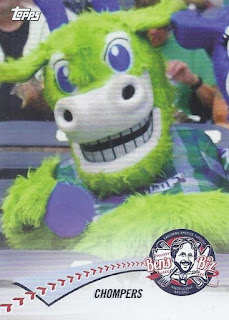 Sadly, there isn't a mascot insert set in this release. But a couple do make appearances in the Ben's Biz set, giving a random look around the minors. Chompers is the mascot for the Harvard Yard Goats. 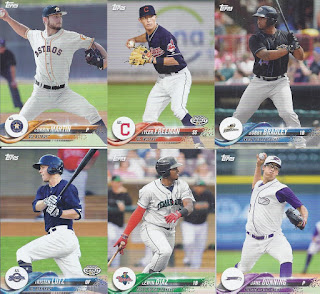 Since I'm not too crazy about Heritage this year, I might pass on Heritage Minor Leagues and pick up a box or two of this to put the base set together.

There you have it!
Posted by buckstorecards at 12:45