One Card Only: The Stone Thrower 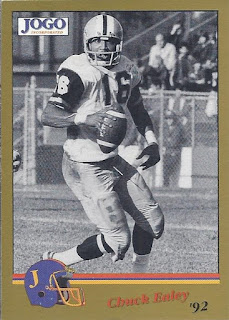 Despite winning 35 consecutive games as a starting quarterback in the NCAA, and leading Hamilton to the Grey Cup in his rookie season of 1972, this card from a Jogo "missing years" set, appears to be the only one he got in his career. OPC was out of the CFL game at the time, and Jogo didn't start until the mid 80s. Hence, the gap that kept there from being CFL cards of guys like Ealey (and Warren Moon) until later. 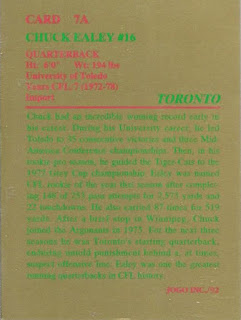 Card makers: For future reference, green text on a bronze background is illegible.
You can probably watch this documentary about Chuck (and find out how he earned the Stone Thrower nickname) in the time it takes you to squint your way through that card.
Posted by buckstorecards at 04:20

Email ThisBlogThis!Share to TwitterShare to FacebookShare to Pinterest
Labels: CFL, football, one card only