Yesterday's post was fun, time for another. This will probably be the last of the posts where I'm going to scan all the stickers in each of the packs. I'll definitely putting asides dupes for sending to the various team collectors, both college and pro, on my tradelist. So, expect something non-card related in future mailers if that describes you. 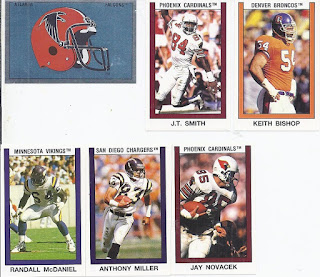 An old helmet style seems like a fine way to start off this trip back to 1989. And a couple of Jays back from when the whole state wasn't worthy of the Cardinals. 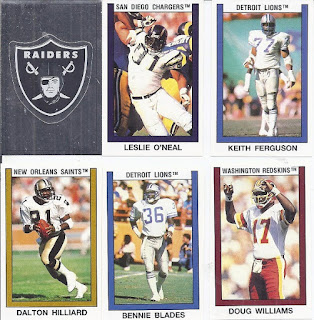 The photos in these generally are not the most memorable, but that O'Neal really stands out as something different in this. 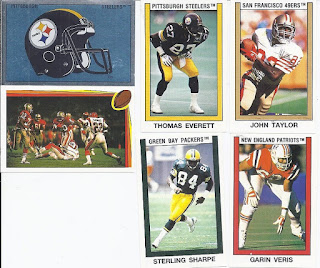 For all I praised the collation of individual packs in the first post, here's an almost complete dupe pack of my 7th pack. Sub Warren Moon for Thomas Everett. 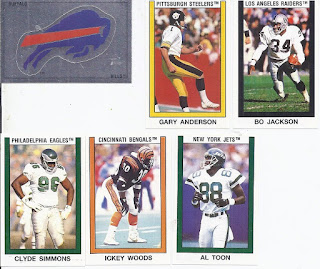 Bills content! I love that kickers get stickers in this as well. In an interesting comparison to card sets of today, 2 teams, San Diego and Dallas didn't get a sticker of a quarterback with their team set. The fact I had to look up who was their primary QB the previous year (Mark Malone and Steve Pelleur) might be the reason why. 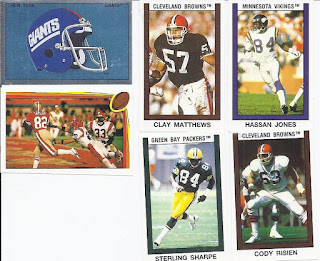 2 Sterling Sharpes within 3 packs. Because of course. 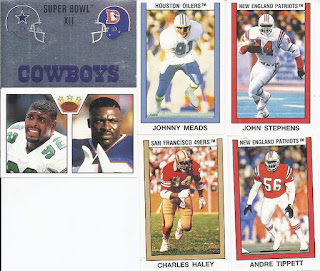 The first of the Super Bowl stickers. These were on a 4 page poster within the album. All 24 games to this point were featured, but only 16 in sticker form. Half a Bills sticker is better than zero. And it is BRUUUUUUCE! 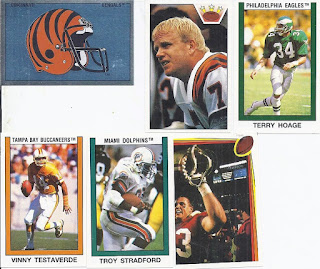 There were only two puzzles in the set, one being a pair of two foil cards that make up the Super Bowl XXIV program on the front, and two that make up the celebratory photo on the back. This features half of Bill Romanowski, with the rest of him, and Greg Cox on the other side. Neither have base stickers. 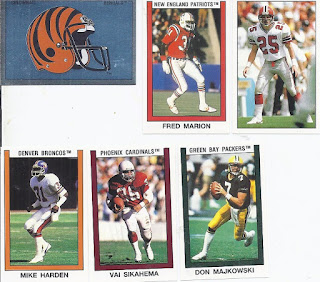 That's Scott Case on the leader card. Via Sikahema's position, listed in the album, is listed as Return Specialist. He might be the only one.

And there you have it.
Posted by buckstorecards at 13:37