Day #1 of recapping the goodies from the Expo. One of probably many. I picked up two hobby boxes at the show, one of 16-17 OPC Platinum and one of 2016 UD CFL. If you think I'm going to pass on the chance to do 2 CFL posts in one week, you haven't been reading here long. 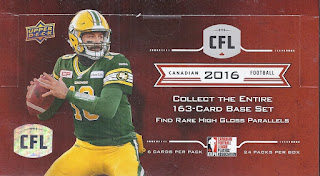 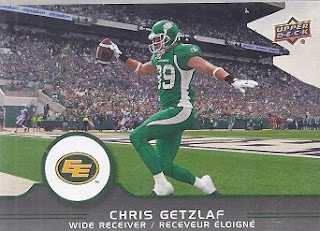 Although there were some nice ones, the photography was generally a slight step down in this release. My favourite from this year was this Getzlaf (Apologies to P,tWiA, but I didn't get dupes of Ryan's brother this year). 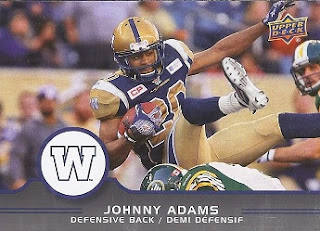 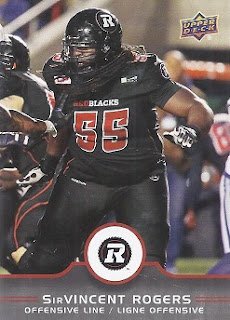 If it seemed like this set was entirely comprised of horizontal cards, here's the standard vertical card. I love that SirVincent Rogers seems like a name of a player in the East-West Bowl. 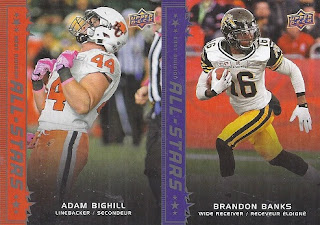 The All-Star portion of the set were also SPd, but these players can be also found among the base cards as well. 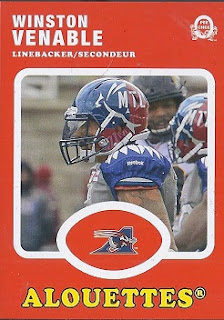 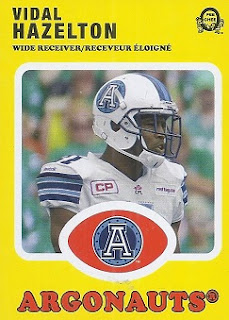 Odd-numbered cards have a red background w/ yellow text, and the reverse is true for even-numbered. The team logo background stays the same throughout. 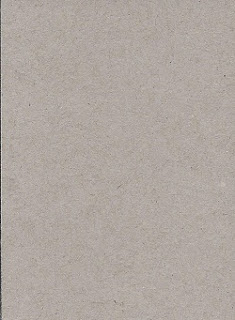 Hey! That Hazelton is blank back! No odds on the back for these parallels, so I don't know how frequent these are. 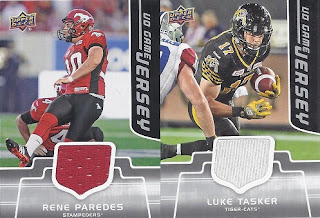 Here are the promised two relics. A Tiger-Cat and kicker card? I sure picked the right box! And there are still more goodies. 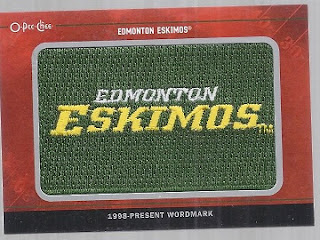 This is the second team patch I've pulled from one of these, getting a RedBlacks one in 2015. 1:128 packs for these, or about 1 per 5 boxes. And there's still more! 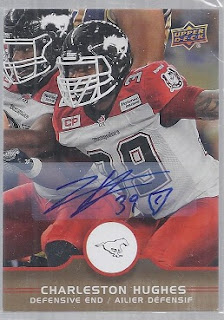 Defensive player autographs fall at a rate of 1:256 packs. I wondered if the C was some sort of Superman-ish shield, and asked Charleston Hughes about this on twitter. Turns out it was, and he now joins Jimmy Mann and Victor Alvarez on the list of folks who add a little sketch to their autograph. Really cool!

And still, that might not have been the longest odds in terms of pulls from this box. 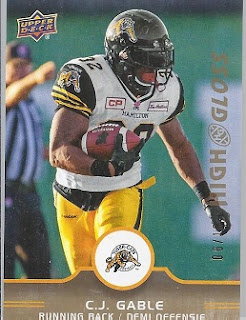 Since there were no odds on the pack in terms of pulling these high-gloss parallels. I've never pulled one of these from hockey, and may never have even seen one in person. This is even better with that I hit a Tiger-Cats one, since I'm a Tiger-Cats fan. That's how you make a rare card even better! 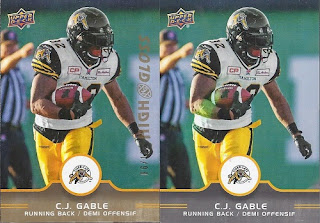 Here's the base and the regular card side-by-side. The green streak isn't supposed to be there, so maybe I got another parallel. No other cards had that on it, so I might not have technically finished the base set. But this will do for now.

And there you have it. I'll get the Platinum posted next time.
Posted by buckstorecards at 10:30