I was really looking forward to busting this product for the first time, as it does have one of my favourite base card designs on a mid-range set. 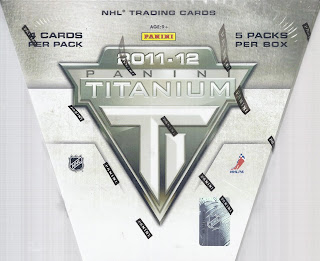 I like the box as well. Not only a trapezoid, but an isosceles trapezoid! I had to look the latter one up.

If you're going to wipe out the background on a card's design, replacing it with the team's logo is a nice way to go. Last year's Bowman's Best did that as well, but in a shinier, chromier way. The hit was a Draft Day auto /99 of Jordan Caron. He was drafted in 2009, hence the 09 on his sweater in the photo. The card also has the 2009 draft logo on the back of the card. Caron is still active, albeit primarily in the AHL, on this side of the Atlantic. That's about all one can ask for from a set like this.

I'm showing the base separately from the hit, because it really deserved a scan of its own. If you want to play along at home, it was a really beautiful card featuring one of the three players shown on the base cards.

Get your bets in.

You can scratch Versteeg, as he only has base cards.

So, that's Price or Thornton.

And the winner is: 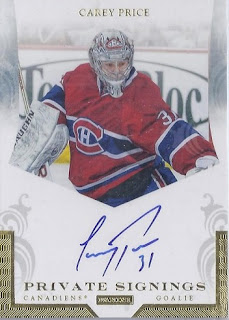 I don't think the rest of the cards really matter after this. I'm actually quite happy to land a Price auto for my PC, since I ended up with an expired redemption for one from a group break. And it is a pretty interesting signature - I really like that both autographs included their number alongside the autograph. The auto is also a SP among the Private Signings inserts.

A nice appearance of both team colours on the Devils dual relics highlight this pack. While the arm colouring on the Flyers/Jets jerseys does give a nice contrast, I think Toews would have looked nicer with the red jersey to add some level of separation from the background.

A couple mask binder cards in this one among the base. The positioning of the Oilers one turned out really nice with the design.

And with this design on the GWG card, the white swatches actually look nicer than their dark-coloured counterparts, popping against the background. Semin and Kovalchuk were the only two players featured on hits in this box that didn't spend last year in North America.

This was really a case of one hit making the box, but boy did it ever.
Posted by buckstorecards at 08:16