Back to my COMC "To Be Posted" box, and a trio of cards heading for my Kitchener Rangers alum binder. 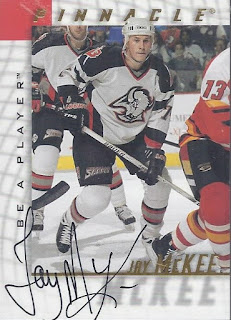 Technically, Jay McKee isn't an alum. Yet. That's only because he was named head coach this past off-season, and has yet to be behind the bench officially. Still, it is always nice to add new faces to the collection. I'll probably add an auto of Matthew Barnaby as well, since his former teammate will be along for the ride as an assistant. 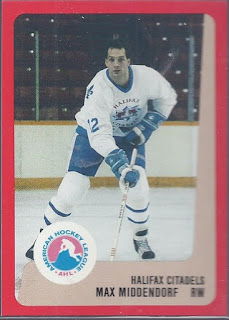 Sometimes, when they don't have NHL cards, you have to get AHL cards. While Max did see some action for the Nordiques, that was back in the day where merely playing a single game in the NHL was not enough to get you a rookie card. So, there's this.

Plus, Middendorf is a fun name to say. 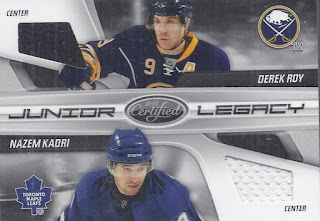 Some of my favourite cards are ones that bring players with a CHL link together. I've got three multi Ranger alum NHL cards so far (Roy, Richards, Robinson relic, Roy/Boedker relic and a Boedker/Landeskog auto) so this is now my third such card with a Derek Roy swatch on it. At least all three have him with different players.

So, an auto of an incoming coach, a minor league card and a dual relic. A nice mix of goodies.
Posted by buckstorecards at 09:33