Time for some Raptors goodies from the COMC shipment that almost wasn't. 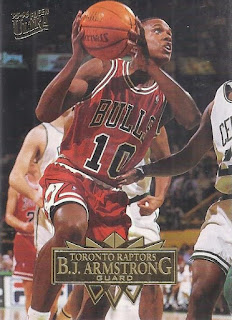 Most of the cards were group break cards that I used the COMC Mailbox in order to save on shipping. This was the only one that was an actual COMC card, and it was part of my quest to add at least one card of every player who had one issued as a Raptor.

BJ Armstrong was selected in the expansion draft. He didn't want to play for an expansion team, so he was shipped off to Golden State for 5 players. The only player of note in that trade was Carlos Rogers, as two never played for Toronto, and two only played a handful of games.

But, this still counts as a Raptors card.

And now, all the group break items. 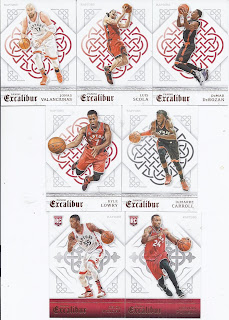 I did want a base set out of the Excalibur and got the 7 card part of it.You can tell this was a later season set because Norman Powell started to show up in these sets with base cards. 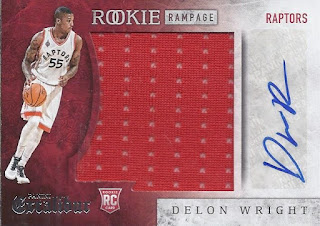 Every 2015 break seems to land me at least one Delon Wright hit. This one seemed to end that streak, as the rest of the breaks landed me some non Wright Raptors hits. 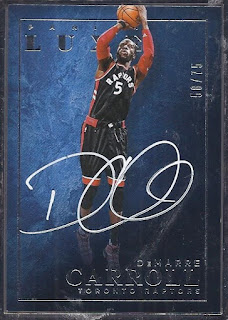 Such as this from Luxe. It is a higher end release, with there being only 4 cards per box, two autos and two relics. But I ended up with one of the Raptors cards in this, getting this silver-framed auto of DeMarre Carroll. This was the first card I got using the mailbox feature, and it is pretty nice in hand, and the ink colour pops nicely on the dark background. I'm not sure if this will fit in the binder, but I'll still make an effort to store it somewhere. 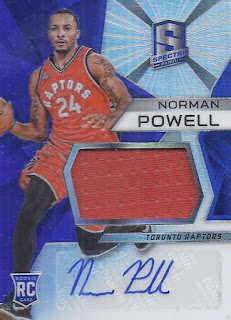 I jumped into a case break of Spectra after seeing that every break seemed to include at least one Norman Powell auto/relic. And sure enough, one did come out. Powell's stuff has dropped in value somewhat in the off-season, but his hits are still well beyond what one would expect from a second rounder. He's already part of the fan favourite grouping, along with guys like Jerome Williams and Matt Bonner. 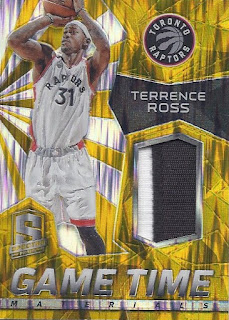 After getting the Powell, anything else would be a bonus. And I landed a second card from Spectra. While Terrence's stock has dropped a bit over the past bit, this is still a nice patch and the card is far more garish in hand that it appears in scan. As with most gold parallels in the Panini brand, this card is /10, and along with the Carroll comprised the numbered cards in this post.

And there you have it!
Posted by buckstorecards at 09:33