I'm leaning towards building this set for the 2016 season. Hopefully, some retail options will become available on this side of the border. Until then, I'll try a few hobby packs. 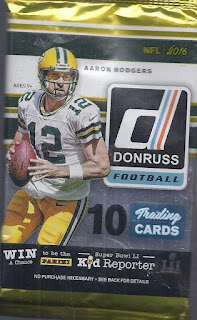 Here's one of the four packs I grabbed. 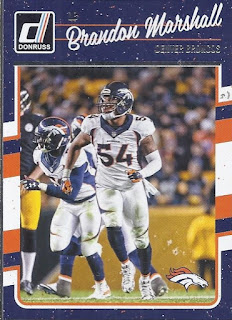 The first card from this set of the season was this one. I'm not the biggest fan of large borders, but for this set, it really works nicely since it is done up in the team colours. This year's cards are definitely inspired by some early 90s Donruss baseball releases. Since I don't hate 1990 as much as some do, I like it. 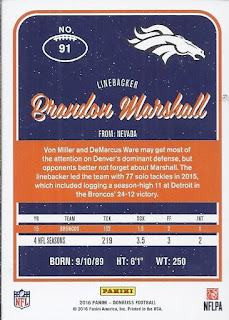 The colour extends to the back of the card. 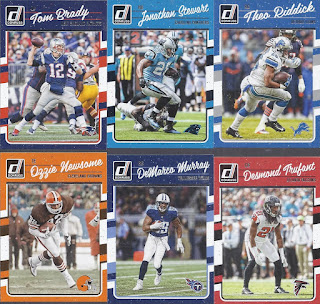 The rest of the base cards from the first pack. These would look interesting in a 500 count box of cards with the changing borders. I really like some of the photo choices in these, especially the Riddick and Newsome. 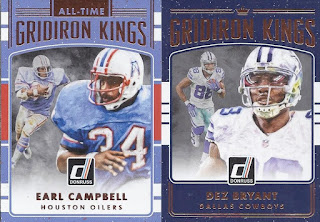 Each pack would contain two inserts parallels. A pair of Texas cards were in this pack. 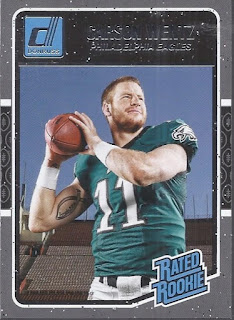 The final 100 cards are SPd rookies, and they fall at one per pack. At the rate, it is still within the range of building the set, although some luck would be nice for adding the big names. Fortunately, my first pack brought the #2 draft pick into my set.

Highlights from the rest of the packs. 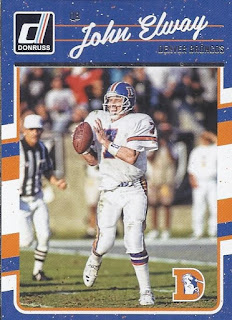 As shown with the appearance of Ozzie Newsome, the base set includes legends. The borders do change with the uniform, so you do get a suitable border for this Elway. 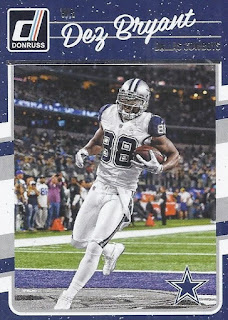 Best photo among the base was this Dez Bryant. A TD photo but cropped nicely to give the stadium a co-starring role. 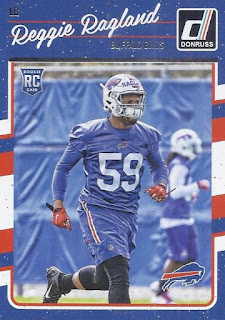 My only Bills card. 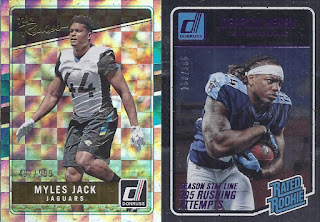 I did land a pair of numbered cards. Myles Jack's is a gaudy insert, while Henry is a stat line parallel, numbered to his rushing attempts. 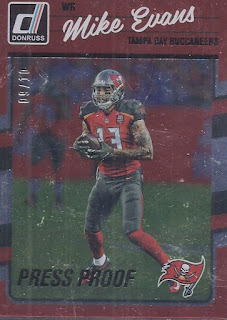 Book value wise, this was my best pull from these packs, with this /10 black press proof of Mike Evans. It will very likely join my next COMC submissions. 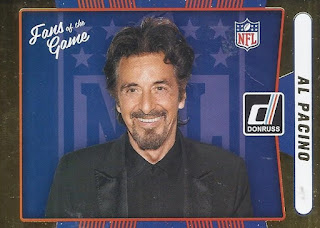 But the best pull of the packs, or at least the most interesting? Fans of the Game makes its return, and I picked up this one among my packs. It isn't quite up with an oddball Ginter base card, but still pretty cool to get.

And there you have it!
Posted by buckstorecards at 10:42