In good news for me, a neighbour dropped off my COMC package yesterday evening. It was not exactly a next door neighbour, as he had to drive to make the delivery. So, at least that is solved, and I can start posting stuff shortly from it. I still have the repack to finish, after all. 3 packs remain, 1990 Donruss, 2013 S2, and 2007 UD S1 Rack Pack. 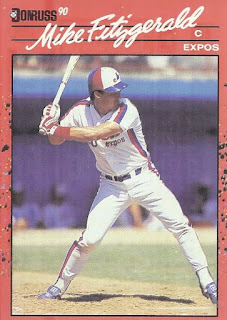 Although I shouldn't complain too much. 2013 wasn't that much more interesting. 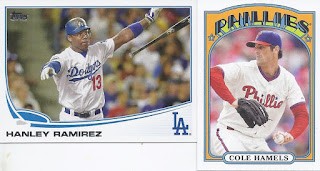 But at least I got a couple interesting photos, although that really is more of a bat toss than a flip. Still, I like this precursor to Bautista's 2016 issue. And I pulled a mini!

And now, what I was really looking forward to busting, along with the Fleer Legends, the rack pack. 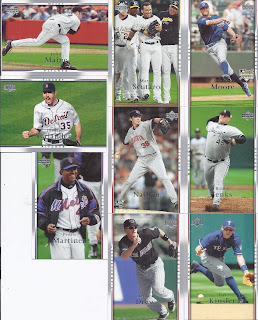 A Mets card is a nice way to start off the first part of the pack. There are nice photos in this group as well, and Scott Moore gets a nice one on his rookie card. Casual Pedro is also pretty nice. 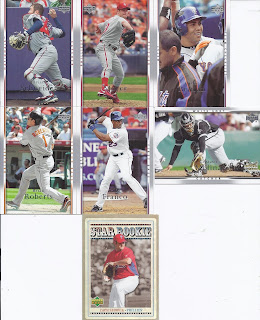 Mets love continues in the second part of the first part. I really like getting Julio Franco cards from his time on the Mets. The Molina will likely end up in my mask binder. The Star Rookies card were one per half of the rack pack. 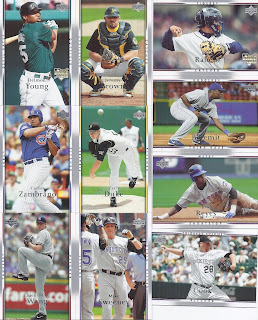 Reyes wraps up the Mets content here, with the 5th card for that binder. Although it is a dupe for me, the Zambrano combo of the pitcher at the plate/broken bat is pretty blog famous. 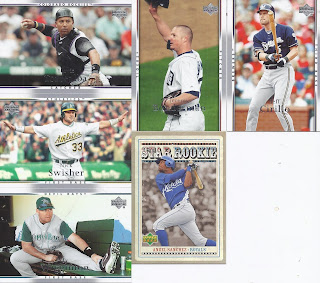 The Jeff Cirillo does have the vibe of him trying to look a foul ball back into fair territory. But, I'll give the nod for my favourite card in this bunch to a former Met, as Ty stretches out in the visitor's dugout.

And there you go!
Posted by buckstorecards at 13:14