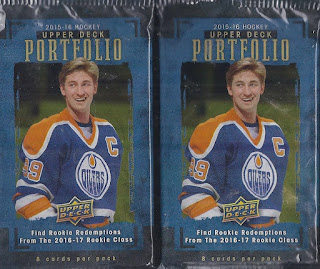 I almost wish this had come out before Champ's. But if it did, I'd probably regret going all-in on building this base set as opposed to going all-in on the Champ's base set. As it is, it was probably wiser to do as I did with Stadium Club, and add a bunch of cards to my wantlist after seeing the scans at COMC. The set doesn't appear to be listed at Sportlots yet, so I might be waiting for a bit. That said, much like with SC, I must sample a couple packs. 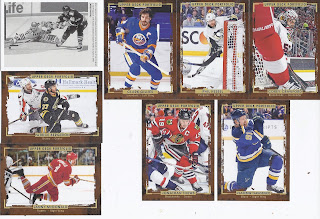 First card out was the Crawford. Definitely an odd photo choice, but I can still appreciate something different in that it shows the lower leg of some random Red Wing. The Mario is a somewhat SP'd (1:7) wire photo, commemorating his 5 goal game. I'm not sure why they opted to picture Lanny McDonald getting tripped up, but it does give me a new Lanny for that mini-collection.  FWIW, the Crawford and Lanny were ones that made it to my "saw it on ebay" wantlist. 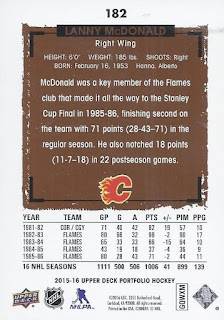 Card backs are typical UD. I'm not sure why they covered Lanny's trip to the finals in 1986 as opposed to his 1989 one. 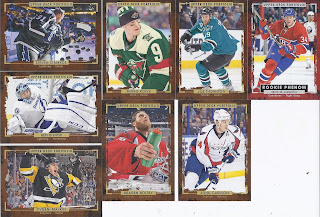 This one did a bit better knocking cards off that list, as the Stamkos, Koivu and Holtby came off. Any card featuring a player wearing a toque is an automatic want. The rookie portion of the main set is not as tough a pull as the wire photo, falling at one every 2.5 packs.

And that leaves 17 wants for my great photo collection from this set.
Posted by buckstorecards at 06:55