You're getting a one-card post today. But I promise it is an interesting one. Red Barrett had over a one-year run as not only the oldest card in my 2-14 collection, but my oldest card period, with his 1949 Bowman card.

With my latest COMC order, 1949 has been bested. 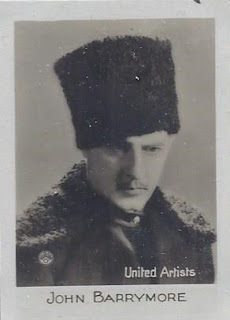 As in this German cigarette card from 1931 of actor John Barrymore.

While he isn't the oldest person in the binder, he is another person born in the 1800s in the collection (Frederick Douglass, Tim Jordan, Earl Smith). There is a dispute over his actual birthdate, but it reads 2/14 on his birth certificate, so that's all I need. And it also reads 2/14 on his 2013 Goodwin Champions card.

Based on the outfit in the picture, it looks like this photo is from the 1928 movie "Tempest."
The movie was also a United Artists picture, which would fit the text on the front. 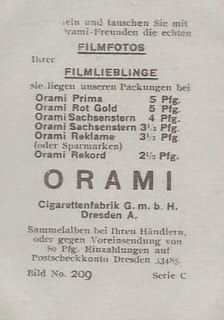 And here's the back of the card. Which tells me more than I need to know about German cigarettes in the early 1930s.

Posted by buckstorecards at 13:32