I love working my way through older cards that permeate Dollarama repacks. My only regrets come from the occasional time the repacks are loaded with early 90s Score and Pro Set.

But, this Surprise Box started off really rough, and it was tough to recover after the first cards came out. The 4 contents of this pack were the rookie pack, the goalie pack, a 5 pack of hard toploaders and a pack of 1998 UD S2 hockey.

And the pack is where it got depressing. 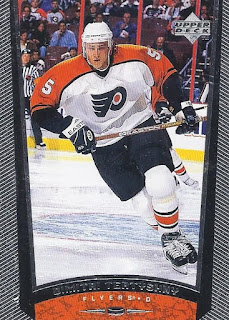 Dimitri Tertyshny - First card out, and it is of a player who has passed away. And it is one of the more unpleasant deaths of an active player in hockey history. Ugh.
Stephane Matteau 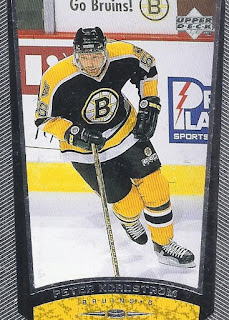 Peter Nordstrom - I had no idea who this was. He spent one season on this side of the Atlantic, appearing in 2 games with Boston and 13 with their AHL team. He only had a handful of cards for his career, so this is a nice addition to my misc. collection. 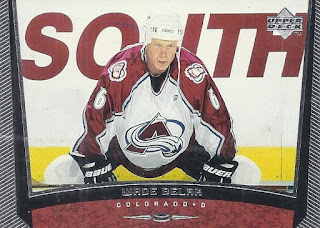 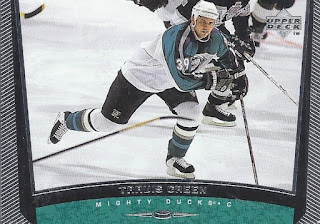 Travis Green - Probably the most interesting photo in this pack, for nothing else than showing the sleeves of the early Ducks uniforms were as goofy as the logo.
Richard Matvichuk
Zigmund Palffy 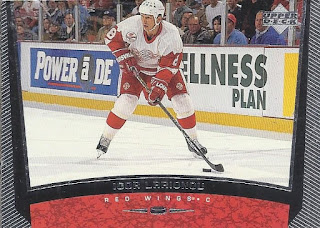 Igor Larionov - Whew. Everybody else in this pack seems to still be alive, at least as per wikipedia. 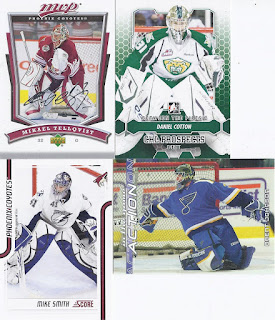 The goalie pack is a pick me up. I think the Smith is a dupe for my mask, but 3 for 4 is a pretty good hit rate. 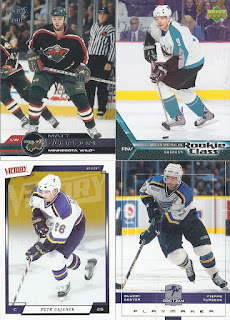 And here's the rookie pack of cards. Actually not too bad of a guaranteed rookie card with a card of future Senator Michalek. And the other 3 cards aren't junk wax issues. That's another plus.

But damn, that was a really crappy start to the repack.
Posted by buckstorecards at 13:13