And the rest...(of the TMM envelope)

I posted a couple of cards yesterday from Dennis @ Too Many Manninghams. Now, the rest of the envelope. 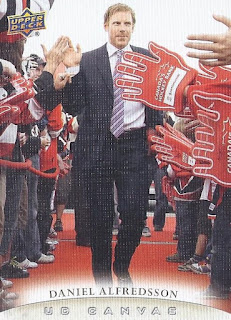 Leading off with some hockey, and a new addition to my Alfie binders. As this was from Canvas insert set, the photo is a little more interesting than the regular base cards. This looks like it was from the season opener at the Corel...Scotia...Canadian Ti...whatever the arena was called when this photo shot. It says Scotiabank on the giant hands, so that seems like the best guess. 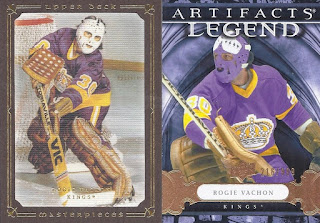 Rogie for the mask binder! 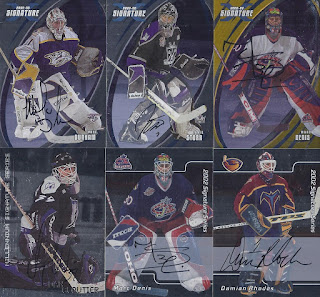 And even more for the autograph portion of my pre strike binder. Mike Dunham wins the penmanship wars, while Cloutier needs to learn to sign with away from the black portion of the card with a black pen. 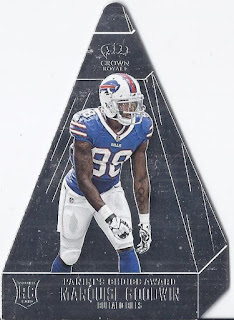 Here's the only football card left to show. I can't wait to get this into the binder so I can stop dropping it when I pick up the pile of cards. 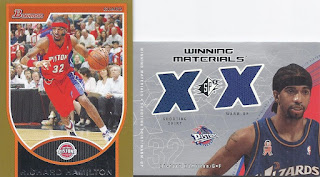 And back to the 2/14 binder with these two cards that allow Richard Hamilton to strengthen his lead in the basketball category. While the relic is a dupe, the other had a black relic, so I'm closer to completing another relic rainbow. 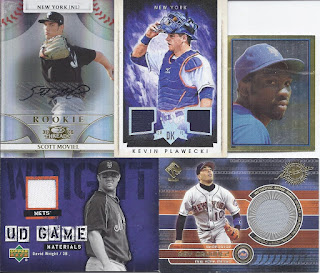 Over to my Mets collection with a quintet of cards. I had no clue about Scott Moviel. He never made it past A ball, and resurfaced earlier this year playing in Quebec with Les Capitales de Quebec and put up an ERA in the 40s over 3 games. Plawecki has been a pleasant surprise after the injury to D'Arnaud. From there, a shiny Mookie sticker. And it is the bilingual OPC version as well. From there, another David Wright for that collection, and then finally back to the Mets general collection for the Ordonez. 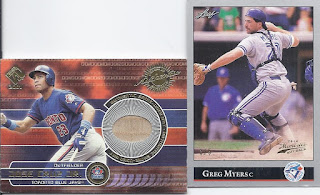 Only two Jays cards for that collection. The Myers is a buyback from modern Leaf. However many they bought back, they only had 5 of this for this particular parallel. 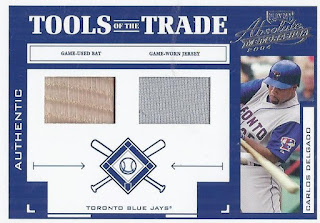 And finally, a Delgado for that binder.

Another great envelope. There aren't any more shows locally until September, so there might not be any new envelopes heading your way until fall.
Posted by buckstorecards at 13:35