Another $2 surprise bag from the Dollarama. 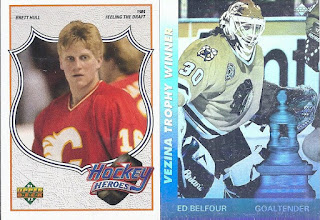 I won't post the entire contents of the UD pack, but did fairly well via my 1991 standards. Two inserts in the same pack! And one is a hologram. I miss hologram insert cards. 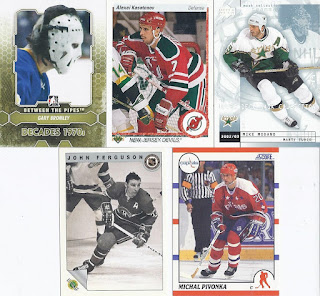 My Hall of Famer was the Mike Modano card. But, with Marty Turco lurking on the card, it will end up in an envelope to Dennis @ Too Many Manninghams. 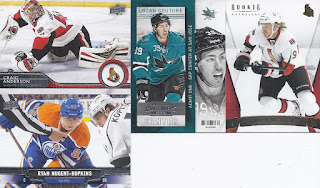 And the 2010s pack. Nice to land a pair of Senators cards in this, but this being a pack of only 2010s card made me realize we are at the halfway point of the decade for hockey releases. I guess there might be a high end set or two left to drop, but when MVP comes out next week, that will start the second half of the decade's products.

Anyhow, I could use the top loaders. and I love those 90s hologram cards from Upper Deck. While I wouldn't call this a winner, I can't call this one a dud repack  either. Middling seems appropriate.
Posted by buckstorecards at 06:26