If these zip codes seem familiar:

An envelope will is on its way to you as of this morning. 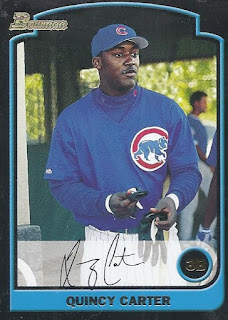 A baseball card of a football guy. Quincy was drafted by the Cubs in 1996, but when this 2003 card was issued, he had pretty much settled into his football career.

A shame he loved the weed a little too much, and of all the passes he made in his career, it was the passing of the drug tests that cased him the most difficulties.
Posted by buckstorecards at 11:34