And I do mean it literally. I picked up a free pack a few weeks back at mojobreak. Generally, they only send hits out on these. But, since I was in a Father's Day break of '14 Court Kings and had the Bills in a case break of Bowman '15, other cards were included. I'd only wanted the two numbered cards, 1 for my PC, 1 for someone else's. But, who am I to refuse a pack of cards?

I'll actually start with the hit. 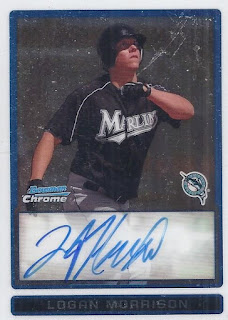 And it is probably one of the better ones to get. Considering sets of this nature can be loaded with guys who never got out of the minors, getting someone with a big league career is a plus. The penmanship isn't the best, but if you look at some of his later cards, such as 2012 Triple Threads' on-card autos, his penmanship actually improved as his career progressed.

And now, the numbered cards. 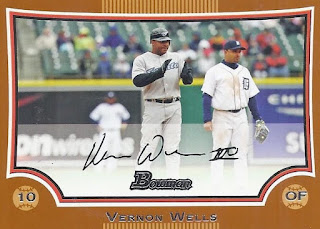 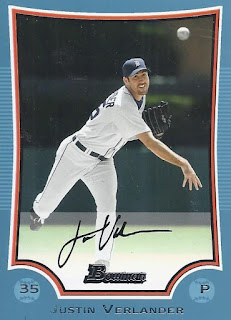 And a /500 for someone else's Verlander collection.

One of the interesting things about this set was the World Baseball Classic inserts. Here's the three of those. And Liddi actually made it to the bigs long enough to get a Topps card.

But it was this that got me thinking. How did other the rookies  in this pack do? 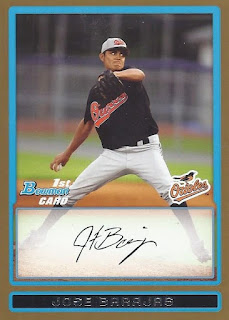 This was the one gold parallel in the pack. Concerning the career of Jose Barajas, he never got past A ball, and spent 2013 and 2014 in Mexico with an ERA over 7 both years.

None of them made it out of A ball.

And the base rookies. 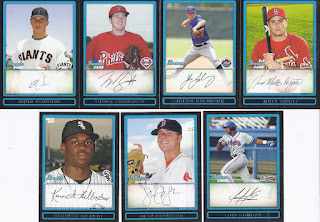 Ryan Verdugo is the first of these guys to have made the bigs. 1 game in 2012 for Kansas City. Even though this card, and its parallels remain the extent of his cardboard career. Tyson Brummett also had 1 big league game, but did get himself a big league Topps card, sharing a 2013 Heritage issue with Hechavarria. He's listed as a Blue Jay there, but never played beyond AAA for them. Jacob Goldberg was the only Met in the
pack. Again, A ball was as far as he got. Rigoli's minor league career stopped at rookie ball, finishing up in 2010 in the Frontier League. Kenneth Gilbert is another A ball guy. Seth Garrison made it AA, but no further, in 2011. But, the final card is yet another guy who never progressed beyond A ball.

And finally, since I scanned all the rookie/FBC guys, here are the veterans. 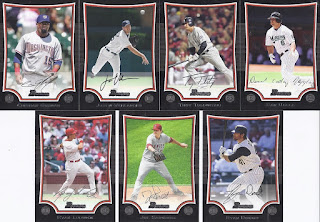 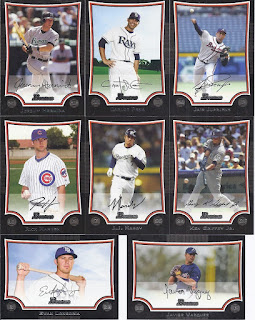 A Rich Harden to my CanCon collection, a nice phoot of Longoria, and an appearance of Ken Griffey Jr makes this a worthwhile portion of the pack.

Not a bad pack, considering the price point. I'll continue my way through the box that showed up tomorrow. Whether I post the Bills, the Court Kings or the Father's Day cards themselves will depend on how verbose I feel.

Posted by buckstorecards at 17:37